• In the three-way Democratic primary for two seats in the House of Representatives in District 3, Andres Cano has 35 percent of the vote, while Alma Hernandez has 33 percent. Trailing both is Olivia Cajero Bedford, the longtime state lawmaker who was hoping to move from the Senate to the House. The race remains close; Hernandez leads Cajero Bedford by just 121 votes.

• The race is less close in the Senate primary in LD3, where Rep. Sally Ann Gonzales is outpacing Betty Villegas with 54 percent of the vote. Gonzales is leading Villegas by 1,292 votes.

• In the four-way Democratic primary for two House seats in Legislative District 10, incumbent Rep. Kirsten Engel is way out ahead with nearly 40 percent of the vote. Coming in second is attorney and musician Domingo DeGrazia, who is up over Navy vet Catherine Ripley by just 181 votes. In fourth place is Nikki Lee, who trails Ripley by just 204 votes.

The two winners in that race will face Republican Rep. Todd Clodfelter, who pulled off a win in the Democratic-leaning district two years ago.

• In Legislative District 2's GOP primary, businesswoman Shelley Kais has a small lead over Bobby Wilson, who scored headlines over his story of how he had to shoot and kill his own mother when she tried to kill him. Kais leads Wilson by 501 votes. The winner will face incumbent Democratic Sen. Andrea Dalessandro.

• In Legislative District 11, incumbent Rep. Mark Finchem and Bret Roberts are out way ahead of Howell "Jonesy" Jones in the Republican primary. On the Democratic side, Hollace Lyons and Marcela Quiroz are clobbering Barry McCain, who has only 14 perfect of the vote. 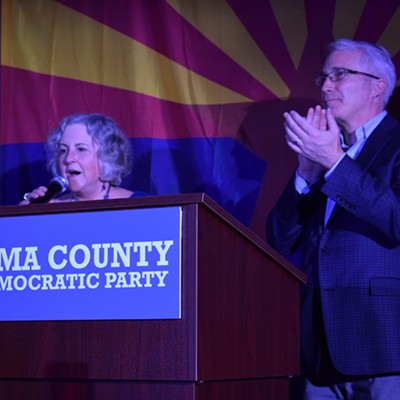