The Charming 'Oaf' Returns to Scoundrel and Scamp Theatre This Weekend


For those of you who missed Scoundrels and Scamp’s Oaf earlier this year, lucky you. It’s being offered again through this weekend, giving you the opportunity to spend a delightful hour or so with Matt Walley, who is Oaf. Walley is an actor who has had extensive training in the field of physical theater, and he brings us an entertaining tale told with good humor and a bit of thoughtfulness as well.

For many, the term physical theater is a bit of a mystery. Quite simply, it is a type of theater in which performers tell their stories not through words, but through their bodies. It uses movement, mime, and dance; it often utilizes music or sound effects; and it’s usually original, developed by the performers themselves.

For Oaf, Walley worked for months to develop the piece with Wolfe Bowart, himself a renowned practitioner of physical theater. It’s a unique process in which experimentation and improvisation are key. One has to find a character, a story and the best way to tell that story. This is not easy stuff.

Here our hero appears to be a performer, in the loosest sense of the word, in a sideshow. But that’s not really the focus. Most of what we see is what happens backstage, when he’s not doing his sideshow bits. But the strongman, oafish freak show character does give context to a story that’s essentially about breaking free from the limitations imposed on us. But Oaf’s antics—of which there are many—are not directly connected to his carnival “showmanship.”

Walley gives us a fun—and fun-loving—character. He relates directly with us, and a few of us can find ourselves literally a part of his world. There are sight gags, bits that morph as they are revisited in a thematic way. There’s a bit of sleight of hand, and because Walley creates a likable and relatable Oaf, our time with him is totally delightful. There are smiles and laughs aplenty. Oaf may not be the most sophisticated of guys, but he’s sweet, funny and in spite of his oafishness, even at times charming. And the trip we take with him is more than worth our time.

There were a couple of things that I was puzzled by. One was the opening image of Oaf himself, which indeed was funny, but seemed unrelated to what followed. Maybe it was simply to tell us what Oaf was not. The other moment was the ending. These are both key moments that could perhaps do with some tweaking.

And there is a concession made to the use of words. Oaf actually does communicate vocally, but his language consists of one word, which sounds mostly like “ralph.”

The performance includes a bonus, a brief preview of Wolfe Bowart’s Cloud Soup, which runs in December and January.

We don’t get to see this sort of theater often in Tucson, and Walley knows what he’s doing. Oaf runs through the weekend. Treat yourself—and young scamps as well—to a very well done and entertaining piece. 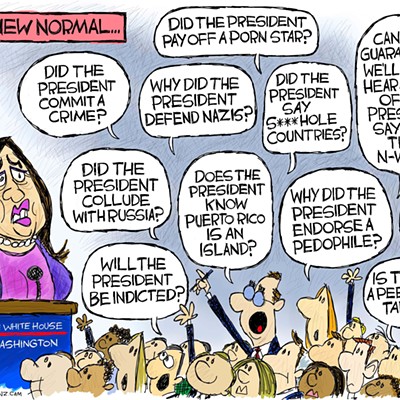 Claytoon of the Day: The New Normal