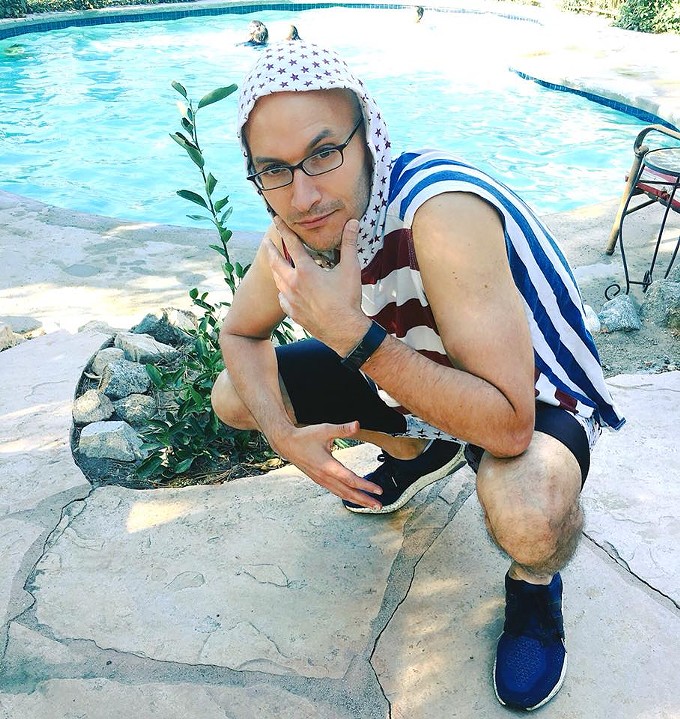 In his hour-long video, Surrender to the Blender, Eric Schwartz is the first to joke about his four-eyed, shaved-headed tech support look. Then he takes off his glasses and, for just long enough, comes on like Channing Tatum with Justin Timberlake pipes.

He’s apt to throw in a little pop and lock for good measure as he’s vocalizing his own beat box. Later, he’ll lean like a cholo and convincingly cover some mariachi.

But the tech support image isn’t much of a stretch. Schwartz’s YouTube channel features two almost NSFW animated cartoons he made in 1993 with Dpaint (5meg) on a Commodore Amiga.
The channel now sports more than 40,000 followers for Schwartz’s fancies, from live shows to sketches, parodies and much more recent borderline NSFW animation made with 2018 technology. YouTube named him one of their NextUp Creators.

Schwartz also has been featured on the Tonight Show, Showtime, Comics Unleashed and BET. GQ India named him one of 5 International Comics You Must Watch, and he’s even been name-checked in Forbes magazine.

“My show encompasses multiple entertainment disciplines—stand up, music, video,” Schwartz says. “It’s so fun to perform. I have a good time; the audience has a good time. Those go hand in hand.”

Schwartz performs at Cans Deli at 8 p.m., Thursday, Aug. 23. Advance tickets are $12, or $25 including a 7 pm meet and greet with Schwartz and openers Joey G and The Frank Show’s Kristine Levine. Reservations are via the Cans Deli Facebook page under Events.

Asked how his Tucson show might differ from his hour-long video, Schwartz ventured, “I think the Tucson show will be different because more people will be wearing shorts that they bought second hand and wore as they rode their bikes to the venue.”

Expect an evening of what Schwartz describes as, “a multi-cultural mix of music and comedy...with a hint of Bar Mitzvah.”

A free beer is included in the $10 admission. Advance tickets are available via SquareUp on the Facebook event page,“Brew Haha Comedy Showcase Present: Chris Thayer!”