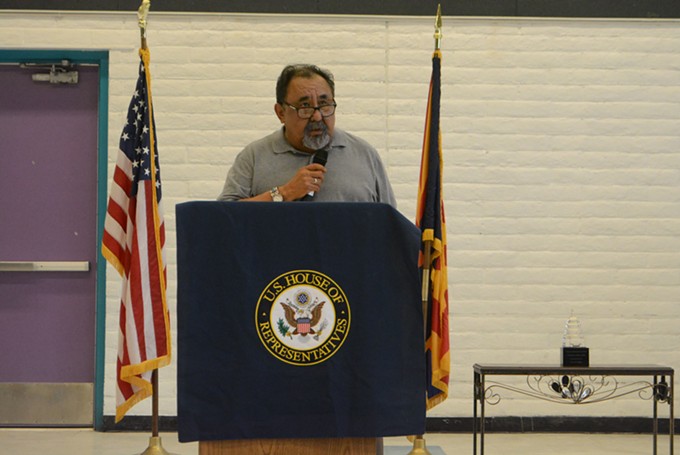 Congressman Raul Grijalva received the first-ever “Democracy Award” for best constituent services from the Congressional Management Foundation, an organization based in Washington, D.C. that works directly with members of Congress to ensure that they are effectively serving the citizens of their districts.

Representative Grijalva and his staff were selected for this award out of 441 other congressional offices nationwide.

On Tuesday, August 14 Grijalva hosted a reception for the award at El Pueblo Neighborhood Center. The congressman received high praise at the event from his staff and the residents of Congressional District 3, but he insisted the recognition should go to his team.

“I’m very proud to be associated with this staff and having our office recognized as the outstanding office in Congress for taking care of people and helping them navigate all the things they have to confront,” Grijalva said during his opening remarks. “Those of us that are members of Congress, we get all the attention, good and bad, but the work of providing service to our constituency, that constitutes what the staff of the district does.”

One of Grijalva’s staff members, Alexandra Martinez, read a letter from a Tucson resident named Eric Lowe who couldn’t attend the event but greatly benefited from the services that Grijalva’s office provides.

Lowe, a former D.C. resident, was diagnosed with Multiple Chemical Sensitivity (MCS) after being exposed to severe toxic chemicals. His condition made it extremely difficult to tolerate normal working and living environments, so he moved to Arizona on doctors’ recommendations because of the supportive climate.

After relocating, Lowe found it extremely challenging to find suitable housing for his medical condition “due to the nature of most conventional building materials, pesticides and other chemical cleaning agents used in those buildings” and was “rendered effectively homeless” because of it. Grijalva’s office helped to expedite his Social Security disability payments, lawyer fees and full back payment. Lowe wrote that this was a “life-saving intervention at a time of absolute critical need.”

Ruben Reyes
On a similar note, David Goodman, another Tucson resident, took the stand to express how Grijalva continuously supports the veteran community and the adversities they face. While working at Fort McClellan, an army base in Alabama that housed chemical weapons before being shut down in 1999, Goodman was unknowingly exposed to toxic chemicals and suffered greatly from it.

He said the federal government refuses to acknowledge and take responsibility for the hazardous conditions. After a decade of attempts, bills that could prevent this kind of disaster in the future never make it to the House floor due to lack of support.

“Mr. Grijalva has supported [H.R.3666] for years, and has gone further than just co-sponsoring this bill,” Goodman said. “He has formally requested a committee to convene a hearing on this matter. I am here today as an Arizona district three resident, but more importantly, I am here as a proud advocate for those poisoned veterans across the country that are too weak to fight.”

In an interview after the event, Grijalva told Tucson Local Media that the biggest caseload his office sees is veteran affairs. He said his team helps veterans with “everything from disability to medical coverage, to taking general discharge and making it an honorable discharge, and getting them what they deserve for their time in service.”

“If we can help a person, we dig in, and if it’s an issue that we can’t help, we’re honest,” he said. “I think that helps the credibility of what these people do.”

Grijalva explained that because of his background is social service, his office is set up with a case management component, so they follow each case much like a social service agency. He believes that residents sometimes don’t realize his office is a close-proximity resource, and that him and his team work as advocates for the residents.

“Our district is unfortunately an underserved area, so we have to pump up the service that we do,” Grijalva said. “And the cases are many times very involved, very difficult, especially now with all the immigration stuff going on, it's particularly difficult to try to get people, try to remedy their situation because it’s harder to work with Homeland Security than it was in the past, they are much stricter on enforcement and less discretion and less compassion.”

However, he did give credit to the Tucson-based Veterans Administration and Social Security Administration for being a great help in his office’s ability to serve constituents. During the event, Grijalva and his staff members thanked the federal and state agencies that they work with on a daily basis: U.S. Citizen and Immigration Services, Department of Veteran Affairs, Western Passport Center, Social Security Administration, Department of Education, IRS and foreclosure prevention services.

By utilizing these agencies along with his influence as a U.S. representative, Grijalva said he takes his ability to help people very seriously.

“We are advocates,” he said. “And I think if people see us not just as merely paper pushers but more importantly, once we take their case, we become their advocate.”

If you are a resident of CD-3, you can visit this website to learn about the specific services that Representative Grijalva’s team offers.