Arts and Culture Community Info Crime & Public Safety Do This! Fun in General 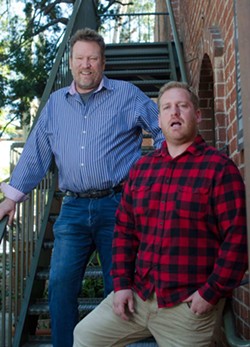 Andy Gold
Comedians Andy Gold and Kurtis Matthews perform in The Addicts Comedy Tour at the JCC on Aug. 16
It’s not funny at all, per se, and it’s almost certainly the world’s worst career choice, but years of addiction have made comedy stars of Kurtis Matthews and Andy Gold … now that they’re in recovery.

Gold recently told The Phoenix Entertainer, “I started doing comedy maybe six months after I got clean, and my whole existence at that time was not using one day at a time.”

For addicts, and their relatives, co-dependents and friends who can relate to that, the JCC show offers a rare opportunity to laugh with recognition, insight and occasionally compassion for their addict’s struggles. For comedy fans and everyone else, it’s just plain funny.

Matthews has toured nationally and internationally since 1984 when a second DUI inspired him to give up alcohol and drug abuse. In 1999, he founded the San Francisco Comedy College, the most popular standup comedy school in the US.

Andy Gold is a favorite at treatment centers and in recovery groups, as well as in comedy festivals and competitions all over the U.S. He began his comedy career in Salt Lake City just six months after a nearly fatal overdose.

Comedy returns to the Screening Room

The comedy revival at The Screening Room follows a hiatus in programming as the theatre transferred to new owners. The theater’s previous incarnation supported at least two comedy shows weekly, including a Tuesday night standup open mike and a Friday night comedy variety show that mixed standup acts and teams from local improv companies.