Samuel J. Comroe’s performance at Houston Baptist University ended abruptly when, in a post-show Q & A, one student asked the one question, face it, on everyone’s mind, “What’s sex like for people with Tourette’s Syndrome?”

He may answer that for you when he appears at Laff’s Comedy Caffe on Friday and Saturday, Aug. 3 and 4, or we may never know. The person in charge of the University’s entertainment program stopped the show and cleared the room before Comroe could respond.

Comroe addresses his Tourettes and related visual tics in his routine, no doubt to put the audience at ease, but he points out that the issue with Houston Baptist is really free speech. Good point.

So what happens when the reins are off? Like everyone else, Comroe jokes about sex, family and life in general. But not everyone is funny enough to make his debut on Conan.

Comroe’s also appeared on BET’s Real Husbands of Hollywood, won both Ricky Gervais’ and the San Francisco comedy competitions and has over 20,000 fans subscribed to his YouTube channel. You may also have seen him in Season 13 of America’s Got Talent.

See him at Laff’s at 8 and 10:30 p.m.,Friday and Saturday, Aug. 3 and 4. Reservations and more information are at laffstucson.com

However you spell it, burlesque history is no grind

Doors are at 9 p.m. Reservations are via Brown Paper Tickets. Guests should dress to impress and bring tipping money for the dancers. VIP seats, $20, are closest to the stage and sell out early. General admission, $10, does not include seating.

Pining for Comedy in Sierra Vista?

Claytoon of the Day: Zuck Needs Some Bucks 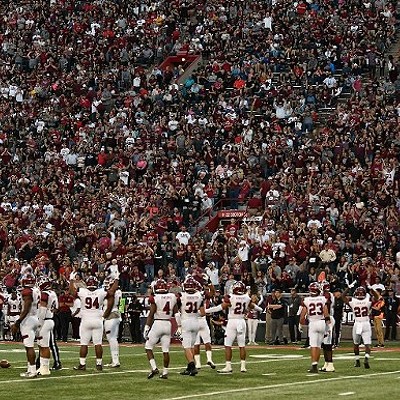