Five Great Things To Do in Tucson Today: Monday, July 23

Birds of Tohono Chul Walking Tour. It’s easy these days to look up at the sky and see only a fickle force of nature, which seems like it’s trying to set you on fire until it starts unpredictably pouring down water. But when you look up at the sky, you also have a pretty good shot at seeing one of the 140 species of birds that have visited Tohono Chul Park (on any given morning, you’re pretty likely to see at least a dozen). From our state bird the cactus wren to sweet little families of quail, from woodpeckers hiding in cactus holes to one of our year-round hummingbird species, they’re everywhere! Head over to Tohono Chul and a docent will walk you through it, teaching you how to identify birds and guiding you down the easy-to walk paths. 8 a.m. Monday, Wednesday and Friday through September.  Tohono Chul, 7366 Paseo del Norte. $10 seniors/military/student, $13 adults, $3 kids 5 to 12, free for members and kids under 5. Details here. 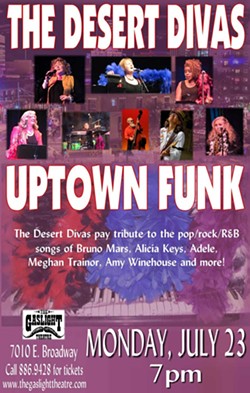 The Gaslight Theatre
Uptown Funk with the Desert Divas. Maybe you like to think of yourself as a desert diva: You can tell the different kinds of cacti apart, you have a fabulous hat to protect you from the summer sun, or maybe you know EXACTLY what ratio you like your Arnold Palmers to be. But the Desert Divas are on a whole other level. These fabulous, feather boa-wearing women are coming to the Gaslight to pay tribute to the pop/rock/R&B sounds of Bruno Mars, Alicia Keys, Adele, Meghan Trainor, Amy Winehouse and more. Grab your fancy hat, an Arnold Palmer, and maybe even a feather boa of your own, and hightail it over to this show. 7 p.m. Monday, July 23. The Gaslight Theatre, 7010 E. Broadway. $22.95 adult, $20.95 senior/student/military, $12.95 children. Details here.

March for Science Presents: Summer Science Trivia! Hooray for beer! And hooray for science! It’s easy to forget (especially after you’ve had a couple of ’em), but a lot of science goes into the making of beer. This week, Mike Mallozzi, the cofounder of Borderlands himself, will be speaking about the science of brewing. He’ll speak and lead hands-on activities for an hour, followed by an hour of science trivia on all sorts of topics. They say you learn better when you really dive into a subject, so you should probably have a beer to get a solid feel for the subject at hand. But this event is also kid-friendly, so beer-drinking is in no way mandatory. 7 to 9 p.m. Monday, July 23. Borderlands Brewing Company, 119 Toole Ave. Free. Details here.

Save Face. Like a graphic novel depiction of human folly, Save Face draw bold outlines, pen quirky lyrics and hold a mirror to modern-age pitfalls. In the fist-pump Epitaph Records tradition of The Weakerthans, New Jersey’s Save Face straddle lines between funny and gut-wrenching, “Are you bored or just preoccupied?” While fans of pre-millennial indie will likely find singer Tyler Povanda’s delivery somewhat cartoony and overwrought, closer listens reveal for all his broad emoting, his intention is sincere, at times thought-provoking. The relentless power-chording and percussive drum/bass recall The Dismemberment Plan when they’re good, or woefully overlooked ’90s band The Cunninghams, steering listeners through hyperbolic nightmares and suburban mundanities with aplomb. And their “Heartache” is the best power-pop song of the last decade, easy. With Prince Daddy & the Hyena. Monday, July 23. Club Congress, 311 E. Congress St. Doors at 7 p.m. $10-$12, 16+. —B.S. Eliot. Details here.

Car Seat Headrest. In 2011 Will Toledo penned his heart out. The tunes, raw and painfully adolescent, particularly in their first-person accounts of a small-town Virginia gay boy, “I never came out to my friends on Skype … I laughed and I changed the subject,” earned Toledo a sizable cult following. Twelve albums (!) and a Matador Records deal later, Toledo returned to his beloved debut, with a full band and the musical know-how to see his songs through. Filled with hard-won grace, the Twin Fantasy album is vital and relevant account of silent suffering many of us do even while scrolling social media. Still searching but now well-worn, Toledo’s scratched-up voice carries the ghost of Elliot Smith and even Nick Drake, nestled in a sweetened swirl of post-Sonic Youth guitars and staccato down beats. And still the brutal honesty, with rising hope prevails: “One day we won’t be alone.” With Naked Giants on Monday, July 23. 191 Toole. Doors at 7 p.m. $15-$17. All ages. —B.S. Eliot. Details here.

Claytoon of the Day: The NRA is Fatale