Stan Liu | Arizona Athletics
Sophomore forward Brandon Randolph throws down a dunk against the University of Oregon during his freshman season on Jan. 13, 2018.
It’s been four months since the University of Arizona men’s basketball team lost in unceremonious fashion to the Buffalo Bulls in the opening round of the NCAA Tournament. Fast-forward some 16 weeks, after the loss of the team’s top five scorers (Deandre Ayton, Allonzo Trier, Rawle Alkins, Dusan Ristic and Parker Jackson-Cartwright) and addition of prized recruit Brandon Williams. The core of what’s left for coach Sean Miller’s team, in rising sophomore guards Brandon Randolph and Alex Barcello, as well as incoming transfer forward Chase Jeter, made their case for why the team’s brightest days are ahead of them. The trio addressed a litany of topics on Friday afternoon, ranging from the team’s standing in what should be a stacked Pac-12 Conference to how the team will overcome the loss of a generational center like Ayton. The group, who combined to average 6.1 points per game last season, seem confident that the Wildcats’ won’t falter this winter. Randolph, who appeared in 31 games as a freshman, has embraced the team’s under-the-radar status nationally, with many college basketball experts picking them to finish in the middle of the conference. “It’s cool … It’s actually getting me kind of hyped. I can’t wait 'till we surprise people,” Randolph said. For Barcello, this season provides a fantastic opportunity to show what on-court camaraderie and chemistry can do, working together to take the conference by storm. “I feel like that's our motivation right now. There's a lot of people doubting us and we use that as motivation,” he said. “Every time we step into the weight room in the gym and even off the court. I mean, we're taking care of our bodies every day. We're busting our butts. Every time we step out on that court were together. And if you watch one of our workouts, I mean our energy levels up, no matter if it's 6:45 AM or 4:30 PM we're were working.” Barcello says fans can expect the Wildcats to run a more up-tempo offense this year, with a team full of smaller, quicker players than in previous years. He believes the team will provide the type of can’t-miss action that has been its calling card of-late, with returning three-point specialist Dylan Smith returning for the Wildcats. Barcello says that Miller and assistant coach Mark Phelps have high expectations for the team and that there will be no pity party for the Wildcats in the Conference of Champions. “They expect a lot from us returning guys and I mean they expect a lot from the freshmen too because it's going to be, collectively with this team, we're obviously not as talented, but I mean we have a great mindset right now,” Barcello said. “I mean those coaches are only helping us with that mindset because they come ready to work every day ready to push us to be the best that we can be.” Long time coming For Jeter, the thrill of getting to lace up the sneakers and take the court for Miller and company is something he won’t take for granted. Jeter, who missed all of last season after transferring from Duke, averaged 2.1 points and 2.2 rebounds in 48 games with the Blue Devils in two seasons in Durham. The 6-foot-10-inch forward will be trusted with manning the paint on both sides of the ball for Miller this season, a role he covets. “For me it's been a long time coming, so I'm going to say, I mean for me it feels like I really haven't played in three years so getting an opportunity now, I feel like my table kind of set,” Jeter said. “It's going to be a great opportunity for everybody this year to kind of step up and show their worth their value on the court and we got a lot of great guys so it's going be good for everybody.” The Las Vegas native said his love for the game of basketball only grew as he was forced into a sabbatical of sorts last season. “You just develop an appreciation for it, you know, when you're not allowed to play the game,” he said. “The amount of appreciation you have being away from getting on a court and actually playing in games. So, I feel like that's the biggest thrill of playing the game of basketball and when you can't do that, it takes your spirit a little bit, but it also makes you appreciate them a lot more.” Jeter expressed some level of disappointment in how his time with the Blue Devils turned out, but, said he’s excited for the potential that’s available in Tucson. He and his newfound Wildcat brethren are chomping at the bit to hit the hardwood this season, with Jeter expressing gratitude for the opportunity to don the cardinal and navy going forward. “Initially when I went to Duke it was opportunity in the role that I wanted it to feel. Things didn't work out for me there,” he said. “So, once I got the opportunity in Arizona, I don't think anything could have worked out better for myself and for my teammates as well.” 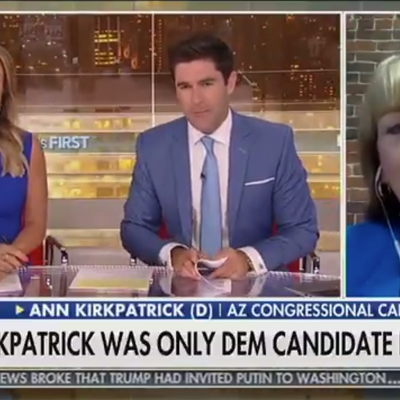 That's Not the Ann Kirkpatrick We Know