JD Souther could be the most famous A-list ’70s dude you don’t know. Yes, he co-penned glacial radio hits for The Eagles (“Heartache Tonight,” “New Kid in Town,” natch), The Seeg, Linda Ronstadt (dated and was a producer for her, too) and Bonnie Raitt, and there was his starring cameo in country-rock stoner supergroup Souther, Hillman, Furay. (Listen for Souther’s “Border Town” on their debut for some epic country-rock sleaze.) Hell, the Songwriter’s Hall of Fame even inducted Souther in ’13. Like Paul Williams, you can hum his tunes, sing off-key to his words and never know what the hell he looks like. But his own stuff, under his own name, soars, even if it didn’t fly of shelves well. (His ’76, Peter Asher-helmed LP Black Rose was a thing of pure Mellow Mafia beauty, and it ascended from there to his ’79 gem You’re So Lonely.) Souther pens songs of a different era, when listeners would still endure painful recollection through song, looking for catharsis. His voice is lonely and vulnerable without apology. When he mourns heartbreak, it’s palpable, when he celebrates life, it’s infectious. We’ve lost this direct transfer of emotion from songster to audience in the digital, any-idiot-with-a-laptop-makes-a-record era, and Souther offers a chance to re-kindle such exchanges the old-fashioned way. Thursday, July 19. Rialto Theatre, 318 E. Congress St. Doors at 7 p.m. $28-$35, All ages. 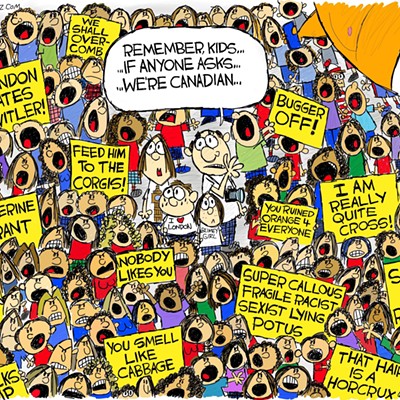 Claytoon of the Day: London Calling

What Day are we Celebrating Today? Check Your Emojis!