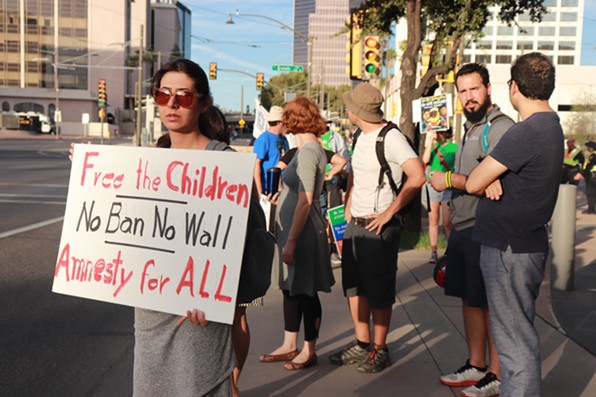 Dalal Radwan
Tucsonans protested across the street from the U.S. District Courthouse.

Elmira Torabzadeh, a researcher from Iran working at the University of Arizona, hasn’t seen her family in six years. The recent ban killed her chances to see her mother, whom she hoped could join her in the U.S. to “take care of me and my baby and see their grandchild.”

Marilyn, who wished not to disclose her full name, took part in the protest. She said that as a Latina immigrant, she rallies and protests the ban in a country “that was built on the immigrant community.” As an immigrant herself, Marilyn said her presence in the U.S. is not an invasion, rather an opportunity “to educate ourselves and families.”

Barbara Mocking has lived in Tucson for 42 years, and wore a mask emblazoned with the colors of U.S. flag. In her hands, she held a sign she said protested “her country’s hijack by an extremely right-winged, homophobic, Islamophobic, Xenophobic government.”


According to Mocking, it is love for her country that drives her to embrace diversity. She identifies as a “citizen of the world,” and believes everyone should have the chance to belong.

A local Tucsonan, Owen Klay stands with those who oppose the ban. Klay said he’s executing his right to “come out here and show that we strongly disagree” with the Trump administration policies.

Annalisa Medina, another protester, said she’s “been blessed to work and learn with a lot of refugees.” Medina said she demonstrated because she believes refugees and immigrants are great people who deserve to live in the United States.

These voices were joined by roughly 50 others, and were heard across the street outside the U.S. District Court downtown. Signs, chants, and honking cars delivered the protesters' message: don’t ban travel from seven countries: Iran, Syria, Libya, Somalia, Yemen, North Korea and Venezuela.

The Supreme Court ruled by a 5-4 decision on the executive order, that was described by the majority as "squarely within the scope" of the president's powers.

Diversity and inclusiveness are core values for the protesters, and Klay believes that “diversity is always important. It introduces you to new viewpoints, new cultures, new values,” and creates a healthy, homogenous community, that accepts people from all walks of life.

Read more about the decision via this NPR article.

23 Great Things to do in Tucson this Weekend: Friday July 6-Sunday July 8

Claytoon of the Day: Dribbling Discourse