Do This! Fun in General Sports

3 Great Things to do in Tucson Today: Tuesday, July 3

Red, White and Brews at the Maverick. Start your Fourth of July celebrations a day early at the Maverick. Get your groove on with dance lessons from 6 to 7 p.m. for $5 each, and then the Jack Bishop Band will take over at 7 p.m. for live music. Sip on domestic beers, house wines and well drinks for $1 off. If that’s not enough of a draw, there will be giveaways, too. But come early: there will be a $5 cover charge after 8 p.m. 5 p.m. to 1 a.m. Tuesday, July 3. 6622 E. Tanque Verde Road. Details here.

FC Tucson vs. Albuquerque Sol FC. Root, root, root for the home team as they face off against their fellow minor league soccer players from Albuquerque. After all, what’s a more American way to spend the Fourth of July week than calling “futbol” soccer? While you’re at it, how about you measure things using the Imperial system, just to show some extra patriotism? When the match is over, stick around for a spectacular fireworks show! 7:30 p.m. Tuesday, July 3. Kino North Stadium, 2500 E. Ajoy Way. $3 to $13+. Details here.

Fireworks 5X5 for the Fourth

Claytoon of the Day: Touched by a President 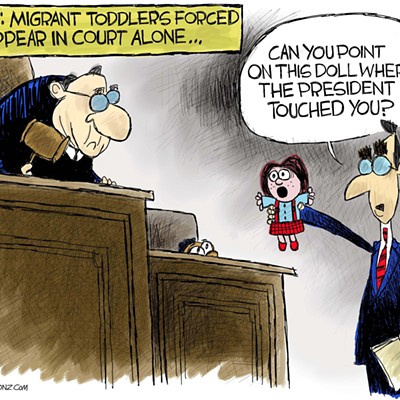