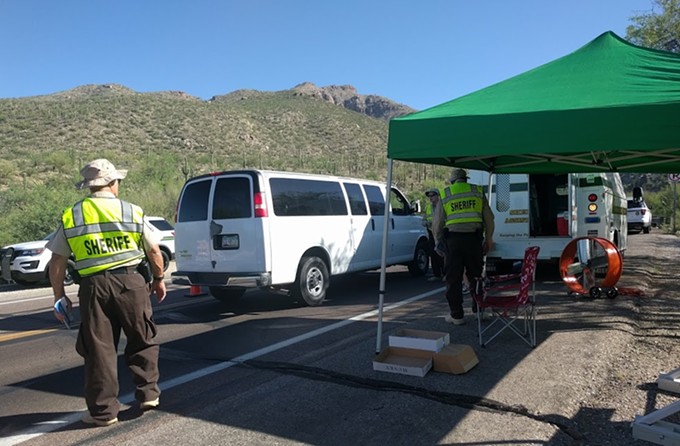 A group of county sheriff’s auxiliary volunteers have begun setting up at the base of the mountain every Saturday and Sunday, distributing fire safety fliers to passing motorists. The fliers, created in collaboration with Pima County District 4 Supervisor Steve Christy, include orders like “No campfires! No barbecues!”

This is the first year for the fliers, but the Supervisor’s office hopes to make it an annual program. They printed 10,000 copies to last the remainder of the dry season.

Mount Lemmon and the rest of the Coronado National Forest has been under Stage II Fire restrictions from the U.S. Forest Service since May 1, due to especially dry conditions. Mount Lemmon Fire Captain and EMT Dan Leade urged campers and visitors to obey the restrictions.

“It’s important to follow the regulations because they’re in place to prevent things like what happened 15 years ago, the Aspen Fire,” he said. “That was started by a discarded cigarette, but campfires start fires all the time.”


The Aspen Fire burned in 2003, destroying much of the mountaintop town of Summerhaven. The town has rebuilt in the past 15 years, but many residents worry a future blaze may threaten their homes again. The volunteers distributing fliers are doing their part to make sure that future fire never starts in the first place.

Dylan Reynolds
A sign on Mount Lemmon indicates that the fire danger is very high.
Stage II restrictions include a prohibition on all fires except petroleum-fueled stoves, lanterns and heating devices. Propane-fueled devices are permitted because propane is a liquid petroleum gas. Smoking outside of enclosed vehicles and buildings is prohibited. Other prohibited activities include off-roading and using explosives.

While some campers and visitors may see the restrictions as an inconvenience, Leanne Mack, general manager of the Mt. Lemmon General Store & Gift Shop, said they haven’t significantly affected business. She said the store has been selling more propane stoves as firewood sales have gone down.

According to the Forest Service document that orders the restrictions, violators can face serious penalties: a fine up to $5,000 for individuals and $10,000 for organizations, and/or a prison sentence up to six months. The order is set to be lifted no later than July 31.

Leade said campers should continue practicing fire safety even after the restrictions are lifted.

“We really encourage people to make sure, if you have a campfire any time of the year, not just during restrictions, that you make sure that it’s put all the way out,” he said. “One of the calls that we run quite frequently is what we call ‘abandoned campfires.’ These are ones that will sit there and smolder, and with the right conditions, wind and fuel moisture could certainly start off a wildfire.”

A Homegrown Candidate with an International Mindset