How does $5 off your monthly electricity bill sound? Most would say good, but relatively insignificant. How about $4 billion in savings statewide and half your electricity comes from renewable energy sources? That’s a future the Clean Energy for a Healthy Arizona ballot initiative is promising all residents and businesses by 2040.

With a growing population in Arizona — 3.2 million new residents are expected to come in the next 30 years — plans are beginning to form regarding how Arizona will provide electricity to such a large number of people.

The Natural Resources Defense Council funded a study that compares two possible futures: one where Arizona Public Service and Tucson Electric Power build new gas-fired power plants, and one where almost every utility provider, except the Salt River Project, sources 50 percent of their energy from clean renewable mediums like solar and wind farms by the year 2030.

An energy firm called ICF conducted this study using their Integrated Planning Model and a few variables established by the NRDC. According to Dylan Sullivan, an senior scientist at the NRDC, the IPM is a big deal.

“IPM is a detailed model of the electric power system that is routinely used by the electricity industry and regulators, including the U.S. Environmental Protection Agency, to assess the effects of environmental regulations and policy,” Sullivan wrote in his analysis of the study.

He explained that this model is designed to consider almost every possible factor of the electricity system and the effects of its operations. Capacity of power plants, technology performance and maintenance, public demand, government policies, prices of resources, the weather — you name it. From there, it finds the most cost-effective way to meet the needs of Arizona’s growing customer base.

According to the study released in early June, when the 50 percent renewables plan is in effect, the IPM predicts the following:


These are some very compelling benefits that Arizonans could have to decide for or against this upcoming November. The Clean Energy for a Healthy Arizona initiative is gaining support quickly and requires almost 226,000 valid signatures by July 5 to make it to the general election ballot.

“We’re the sunniest state in the country, but we’re only getting around six percent of our energy from solar power,” Rodd McLeod, a spokesman for the ballot initiative said. “It just doesn’t make any sense.”

Clean Energy for a Healthy Arizona and the NRDC have been actively refuting claims made by APS in opposition to the ballot measure. The utility giant says that if the measure passes, the Palo Verde nuclear plant would have to close down, resulting in drastic job cuts. They also claim that bringing in more renewable energy will do nothing but raise electricity bills.

The NRDC’s newly released study was very timely for the purpose of proving APS wrong. The IPM showed that we get about a third of our electricity from nuclear energy and that amount would stay the same even with the 50 percent renewable energy requirements in place. The jobs at the Palo Verde plant are safe, and prices for large solar projects have actually been dropping in recent years.

McLeod said the ballot initiative is also about giving Arizona residents a say in how we source our energy, instead of leaving it up to the big utility companies who may have private corporate interests.

He added that building infrastructure for solar and wind farms is actually less costly than building new gas plants.

The coalition behind this initiative is growing quickly. McLeod said that the plan is backed by the Arizona Public Health Association, the Arizona Asthma Council, the Building and Construction Trades Council, Technicians for Sustainability, Physicians for Social Responsibility and many more.

In a detailed article about the political campaign warfare that has ensued over this ballot initiative, Ryan Randazzo from azcentral.com reported that Clean Energy for a Healthy Arizona accepted $957,000 from billionaire activist Tom Steyer's political action committee NextGen Climate Action.

“Going to a 50 percent renewable future will save people money,” McLeod said. “It’s a less expensive option for Arizona ratepayers than the APS plan of filling more natural gas plants. We think that it’s really important to examine the benefits for our health, for our environment, for our air, for our water and also for our pocketbooks.” 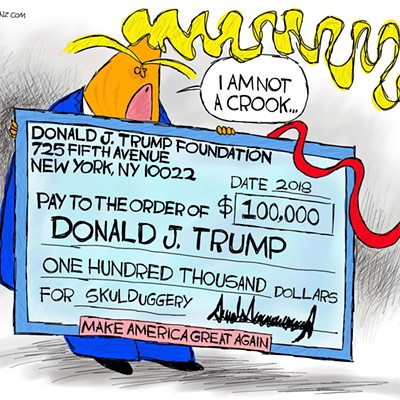 Claytoon of the Day: The Chump Foundation