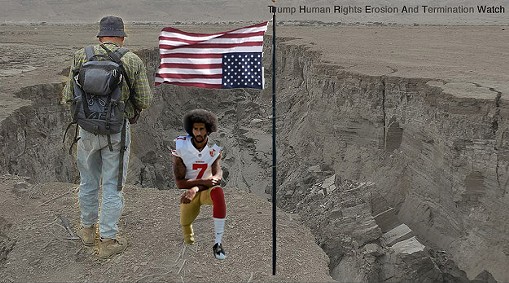 "When Trump dog-whistled about globalists, I didn't realize he was talking about Jews until after the election." "The monstrous nature of the Jewish people must be known to the public." “I propose a government that makes counter-Semitism central to all aims of the state."
Patrick Little, Republican, California, running for U.S. Senate. His campaign poster: END JEWISH SUPREMACY OVER U.S. POLITICS & SOCIETY.

"I consider myself a white racialist." "Six million Jews [killed in the Holocaust]? Ridiculous!"
Arthur Jones, Republican, Illinois, former member of the American Nazi Party, ran in an uncontested primary for Congress in Chicago, received 20,000 votes.

"It's not because we're racists. It's because we feel marginalized. We're the ones who are being oppressed."
Arthur Jones supporter

“Armed machine gun turrets every 300 yards [on the border]. And you can automate those. Anyone who approaches that barrier will be treated as an enemy combatant. Man, woman or child.” "Jews…commit a disproportionate number of mass shootings.”
Paul Nehlen, Republican, Wisconsin, running for a congressional seat.

Called Virginia Democratic and Republican candidates for governor "cuck" and "cuckservative." ("Cuck" is short for "cuckhold." In alt right parlance, it refers to a white man who watches his wife having sex with a black man.)
Corey Stewart, Republican, Virginia, running for governor. He came within one percentage point of winning the Republican primary against Ed Gillespie by devoting his campaign to defending Confederate monuments.

The racist, antisemitic vermin are crawling out of the shadows and into the political spotlight, liberated to speak their minds by Trump's stream of populist/tribalist invective directed at everyone who is a perceived threat. Of course, the Republican leadership makes a point of repudiating these outspoken candidates who dispense with dog whistles and go straight to the bull horns.

But Trump said "some very fine people" marched in Charlottesville chanting, "You will not replace us. Jews will not replace us," and he got away with it. He said border crossers are drug dealers, criminals and rapists, which received a fist pump from lots of Republican voters, while party leaders clutched their pearls. Days ago, Trump coaxed his audience to shout "Animals!" in response to a statement directly talking about members of MS-13 but indirectly referencing all the undocumented immigrants he wants to deport and the border crossers he wants to stop by any means necessary.

As unhinged and undisciplined as Roseanne Barr is, even she might have thought twice about tweeting "Muslim brotherhood & planet of the apes had a baby=vj" referring to Valerie Jarrett, if she hadn't heard similar sentiments from the man who occupies the highest office in the land and who lavished praise on her now-canceled show. She thought she was bullet proof. Trump had her back.

A poll taken last August indicated that 17 percent of Trump supporters think it's acceptable to hold neo-Nazi views. Another 13 percent have no opinion on the matter. That's 30 percent of his base who will tolerate or applaud candidates whose views should terrify every decent human being. That is terrifying, a clear and present threat to our democracy.

The Library is Here for Everyone: LGBTQ+ Programming a Top Priority