In the Flesh: The War on Drugs 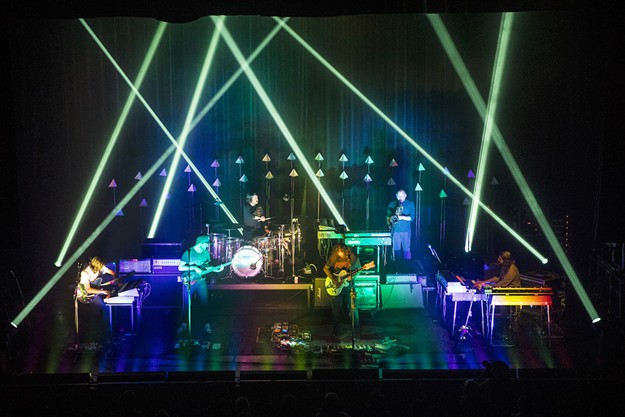 C. Elliott Photography
The War on Drugs played the Rialto Theater on April 17.

The thousand or so folks that poured into the venerable confines of Tucson's Rialto Theater on Tuesday, April 17, were treated to a night of pulse-pounding, soul cleansing rock and roll.

Philadelphia-based sextet The War on Drugs, making their first appearance in the Old Pueblo in seven years, packed the downtown venue.

They didn't disappoint, performing virtually the entirety of their 2017 album, "A Deeper Understanding," while mixing in fan favorites from albums like "Lost in the Dream" and "Slave Ambient."

Singer Adam Granduciel and company played for 108 minutes of uninterrupted beauty, before taking a few minutes to catch their breath at 11 p.m. on Tuesday, April 17.

They returned to thunderous applause for a three-song encore, playing deeper cuts from their latest album, before walking off the stage for the final time.

The band's mixture of high-energy music and high-tech LED stage lighting, which beamed through a veneer of mineral oil to create a bars of light in front of the stage, was all part of a can't-miss experience that attendees will remember for a long, long time.

Granduciel waxed nostalgic on various bits of Tucson nightlife, remarking on his first trip to the region some years ago, playing at Plush (now known as The Flycatcher).

It was quite clear that Granduciel and his bandmates share a high level of camaraderie, given how in-sync they were on Tuesday, and how happy they seemed to be playing together.

The highlight of the night for me came just before the band's momentary break, when they launched into a rendition of the band's first AAA chart hit, "Under the Pressure."

The song, known for its long and dramatic crescendo, featured an extended interlude, which whipped the crowd into a delirious frenzy.

Granduciel and his bandmates finished the song with deft mixtures of saxophone, guitar and keyboards—producing a venue-wide euphoria unmatched by any show I've attended in my four years in Tucson.

It was remarkable to see the crowd surrounding me, which varied in age from high schoolers to white-haired seniors, bobbing and singing along to the band's toe-tapping favorites.

Even more impressive was how engrossed the 1,000-plus people around me were for the band's deeper cuts, showing how dedicated their fanbase is to their music.

I've long wanted to see the sextet in person, having grown up listening to the band in Maryland. I used to play their early albums as a college disc jockey, and heard from friends about the spectacle that is a War on Drugs concert.

It was enthralling to affirm what so many had told me, and an absolute joy to say I was there to see the band's first Southern Arizona performance in nearly a decade.

Claytoon of the Day: A Cosby Sweater