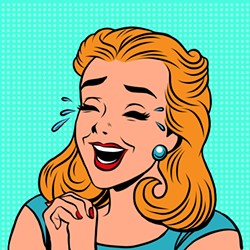 “BBVN is a neighborhood that's more like a village,” says Richard Richard Roati, board member of the Broadmoor Broadway Village Neighborhood Association in the mid century modern heart of Central Tucson. “Casey Bynum offered the club for a fund-raising event for our historic designation.” The community-spirited Bynum lives in the neighborhood, and manages the nearby, family-owned Laff’s Comedy Caffe.

The benefit is set for 7 p.m., Sunday, April 15, featuring comedians Daryl Felsberg and Steve Gillespie, who also perform at Laff’s Friday and Saturday, April 13 and 14 at 8 and 10 p.m. Felberg has been heard on Sirius/XM Radio and seen on ComedyBBQ; Gillespie has been see on Conan O’Brien’s show and Laughs TV.

Tickets for the benefit are $12, or $10 online at laffstucson.com. Tickets for April 15 all benefit the BBVN. Friday and Saturday shows are $12.50. There’s always a two-item minimum.

Anchored by the Josias Joesler-designed Broadway Village Shopping Center at Broadway and Country Club, Broadmoor was among the first planned subdivisions built after World War II. Its developers designed for walkability before that was a thing; nature trails along Arroyo Chico and the Treat Walkway feel far from any road. More historic details are at broadmoorbroadwayvillage.com.

So many asterisks! What are they hiding?

“It’s a high energy showcase of stand-up with a touch of storytelling, poetry and music,” Mo Urban explains, simply, regarding the one of her many comedy productions with the longest, most provocative name: “The C*nts Being C*nts Talking About C*nts Comedy Show. “It’s a showcase featuring a cast in which everyone identifies as female.”

The show is not all about body parts, although they often surface with the artists’ whims. “I started out wanting a space to share hilarious things without fear of being dismissed as a cunt. It’s evolved to what it is now, a celebration of owning the word, cunt.” She quotes Inga Muscio, “There is no place for rape in a society filled with women who love our cunts.”