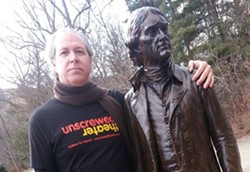 facebook.com/uncscrewedtheatre
Unscrewed Theatre's Chris Seidman confers with the architect of Monticello.
Chris Seidman, executive director of Unscrewed Theater, furrows his brow a little as he works at a yard-sale table in a vacant room of an empty 3,300 foot retail space. Voted Best Comedian in Tucson Weekly’s 2017 Best of Tucson™ poll, he’s now juggling some serious adulting, designing the space and raising money to build the company’s new, 100-seat theater. His priorities are clear, though. “The thing I want to get across is that we are going to continue performing regular shows every Friday night.”

Unscrewed Theater has moved to new space in Midway Office Park at 4500 E. Speedway, but for as long as the space is under construction, the company will perform shows at 7 p.m., Fridays at Dedicated Gluten-free Bakery, with which it shares a wall. “We’re calling it the Next Door tour,” he says, “but we also may be doing pop-up shows around town.” The way to keep up, he says, is to follow the events at facebook.com/UnscrewedTheater/.

Each show will feature two of the theater’s house teams, the original Not Burnt Out Just Unscrewed, the musical group From the Top, and two new teams, Leaky Faucet and Comedy Chaos, who debuted last weekend in the closing shows in the old space across from the Loft Theatre.

“We’re calling these shows ‘exclusive’ because we can only seat 30 people. Everyone who wants to get in should buy tickets in advance through our Facebook page or the website, unscrewedtheatre.org.” Dedicated will extend its hours for the show and offer a limited menu.

“Its going to be a lot of work,” Seidman says, “but we’re really excited about this location.” Heading the list of its benefits, he says, is a five-year lease. The Unscrewed organization held its collective breath every year, or less, when the lease came up for renewal at the old address. The next best thing, he says, is that, “We actually face the street so people can see us from the street. They can drive right up to our door.” The entrance to the former theater faced a parking lot behind its building. “Visibility is a really important thing, and there’s plenty of parking.”

The new space will have a classroom for workshops and classes, but Seidman says the dream is to expand further. We’re counting on the fact that (this complex) has so many vacancies, that a space close to us will open up soon that we can dedicate to our training center.

A volunteer-run nonprofit, Unscrewed is funding the construction, in part, with online donations and the sale of limited edition T-shirts. In addition to funding, Seidman says, the company is always looking for volunteers to help with administrative duties, marketing and behind-the-scenes theatre work.

Claytoon of the Day: Drain the Sewer 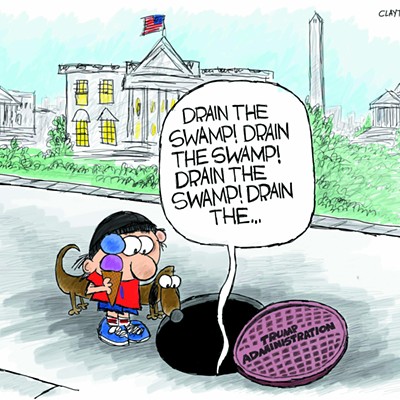