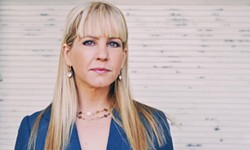 Charissa Feathers
Lisa Landry is at Laff's Feb. 9 through 14
As big fans of Lisa Landry, we were a little surprised not to find her on WSJ24/7’s list of the 50 Most Popular Female Comedians. Alas, the field was such that even Tracy Ulman was only ranked 42. The list ended well short of comedians we actually can see live and affordably here in the Old Pueblo.

Landry probably neither heard of that list nor gives a shit about it. (She might use more graphic language but wasn’t available for comment.) Still, it, and others similar, reflect a fairly recent surge in the number of women making a name in comedy.

Over the next three weeks, Laughing Stock will cover funny women exclusively, not to serve any agenda (not that we're above serving an agenda) but because women are legitimately the biggest comedy stories in town this month.

Landry will headline the weekend shows at venerable Laff’s Comedy Caffé, Friday and Saturday, February 9 and 10. She’ll return for a Valentine’s Day special, with roses for the ladies, on Wednesday, Feb. 14. Visit laffstucson.com for details, video and reservations. You should probably hurry.

Hurry faster for reservations for Landry’s headlining turn on Sunday, Feb. 11, in the Valentine’s Day edition of The Estrogen Hour, which almost always sells out. That (approximately) triennial event has launched almost every woman comic in Tucson. It’s hosted by arguably Tucson’s top woman comedian, Nancy Stanley. With Mary Steed, she invented the show a few years back to benefit the Leukemia and Lymphoma Society. Laff’s regularly hosts this show, but does not sell tickets. All reservations are handled via an LLS system at tinyurl.com/msmarylaffs. That site also includes all show details and a history of The Estrogen Hour.

Landry’s jokes are NSFW, but whip smart and real as pot smoke, motherhood and this morning’s continental breakfast at Rodeway Inn. As a single mom, she honed her craft in the overheated competition of New York City comedy clubs. Comedy Central gave her a solo special, and she won third place nationally on the network’s “Standup Showdown.” Craig Ferguson’s audience gave her a standing ovation. In Las Vegas, she has headlined nightly shows at The Stratosphere and Planet Hollywood, and on TV, she’s acted in a dozen series.

The Weekly List: 27 Things To Do In Tucson This Week 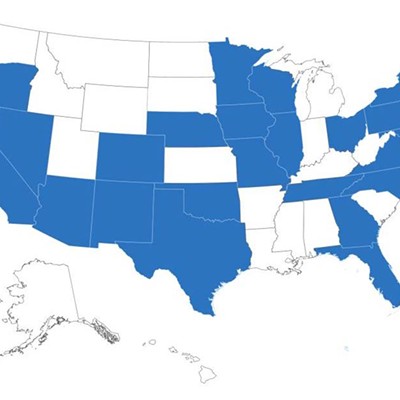