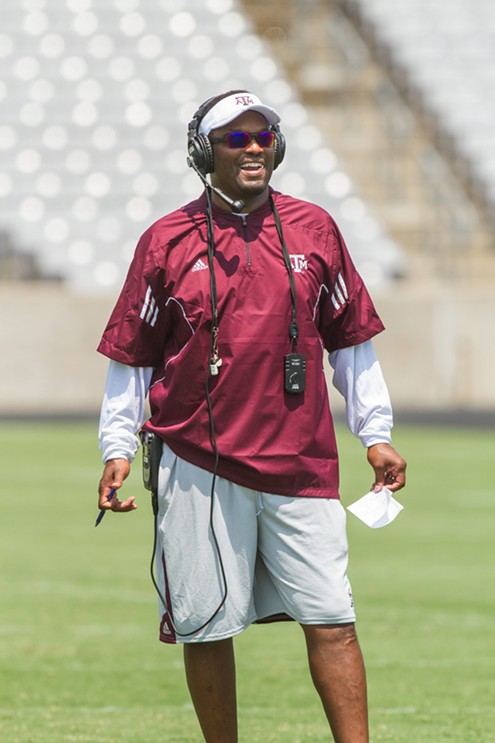 Wikimedia Commons
Former Texas A&M and Houston Coach Kevin Sumlin
Unless you’ve been living under a rock for the last 24 hours, you probably know there will be a new football coach in Tucson come fall.

The University of Arizona is tasked with finding said coach after ending its relationship with Rich Rodriguez, siting concern over the “Direction and climate of the football program,” as stated in a bombshell released on Tuesday night.

There are many names that will jump to the top of people’s lists, including former star athletes (cough, cough—Chuck Cecil), and big-names, like former Texas A&M and Houston coach Kevin Sumlin.

The bottom line is that whoever the next UA football head coach is will be tasked with the unenviable assignment of keeping the 16 players that signed their National Letters of Intent last week, while adding more by the Feb. 7 deadline.

It’s imperative that Director of Athletics Dave Heeke and President Robert C. Robbins find their man, and find him quickly, so that person can have ample time to lock down a solid recruiting class.

The Wildcats, fresh off a 7-6 season that ended with a disappointing 38-35 loss to Purdue in the Foster Farms Bowl, have a lot of young talent on both sides of the ball—with dynamic quarterback Khalil Tate on offense, and a defense spearheaded by rising sophomores Kylan Wilborn, Colin Schooler and Tony Fields, II.

There’s plenty of talent on both sides of the ball to build around for the next coach in The Old Pueblo, but the clock is ticking for Heeke and company to nail down a solid recruiting class.

Without further ado, here’s who I believe Heeke should seek out to be the 21st coach to roam the Arizona Stadium sidelines.

1. Kevin Sumlin: The former Houston University and Texas A&M coach should be Heeke’s main target, with an impressive 86-43 record in 10 seasons of work. Sumlin was chased away from College Station for “only” winning seven-to-nine games a year, and has recruited the state of Arizona exceptionally well, landing sure-fire first round NFL pick and Scottsdale native Christian Kirk—who’s hauled in 234 catches for 2,855 yards in his three seasons under Sumlin, as well as Tyler Bruggman and Priest Willis. It’s clear that Sumlin, who’s owed $10 million from Texas A&M regardless of whether he lands another job or not, will likely come cheaper than you’d expect. That extra money can be used to entice quality assistant coaches to come to Tucson, which would be a win-win for all involved.

2. Derek Mason: The 43-year-old Vanderbilt coach is a Phoenix native, and went to college at NAU, which bode well for his familiarity with the region. Mason has experience coaching in the Pac 12, working as the defensive backs coach, defensive coordinator and assistant head coach under David Shaw at Stanford from 2010 to 2013, and knows how to recruit west coast kids. Mason knows how to recruit players to unenviable locations, having led the Commodores to a bowl bid in 2016, and a respectable 5-7 campaign in a brutally tough SEC East this fall. He’s clearly an up-and-coming coach, and could likely be talked into moving back west, considering his paltry $2 million salary—less than the $2.1 million base salary Rodriguez received this year.

3. Jeff Monken: Monken has quietly built Army into a powerhouse program, making back-to-back bowl trips, with wins over North Texas and San Diego State in those games. Monken, who has lived a vagabond life, with assistant coaching jobs at Hawaii, ASU, Buffalo, Georgia Southern, Navy and Georgia Tech, as well as a three-year head coaching stint with Georgia Southern before taking the Army job. His Black Knights’ led the nation is rushing yards per game (362.3), and his run-first mindset would pick up where Rodriguez and offensive coordinator Rod Smith left off, with the Wildcats ranking third in the same category this season.

4. Lane Kfifin: The outspoken former Oakland Raiders, Tennessee Volunteers and USC Trojans coach has found his niche in Boca Raton, leading the Florida Atlantic Owls to a 11-3 record in which he won the Conference USA Championship, before knocking off Akron in the Boca Raton Bowl. It’d be awesome to see the “Lane Train” return to the Pac 12, and to see what Kiffin, who engineered the USC dynasty of the early-2000s as the Trojans’ offensive coordinator, could do with Tate at quarterback.

5. Chuck Cecil: I frankly don’t see why anyone would want to hire a man with zero college coaching experience, but everyone else keeps throwing Cecil’s name into the ring, so why not? Cecil, who returned to Tucson in an advisory role this fall, previously worked as an assistant in the NFL, as the Tennessee Titans defensive coordinator and St. Louis/Los Angeles Rams’ secondary coach. He’s the go-to guy, if Heeke is looking to pull a page from ASU’s playbook, as the Sun Devils hired former NFL head coach Herm Edwards for their opening last month, despite the fact that Edwards hadn’t coached at any level since 2008.

Everybody in Arizona Is For Education