Run The Jewels Put Meaning Behind The Mania At Lost Lake 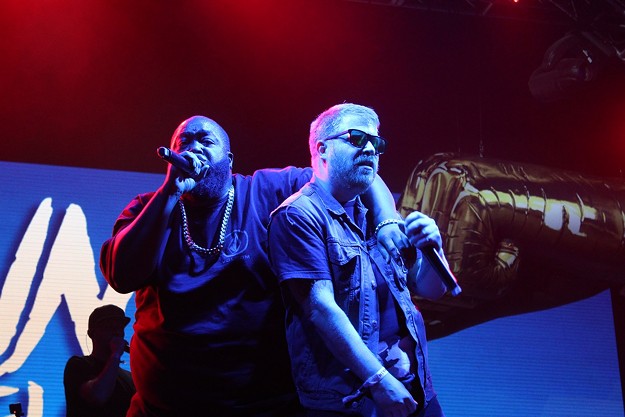 Jeff Gardner
Even the security guards volleyed beach balls when Run the Jewels took the stage. And they definitely did take the stage—by force. The hip-hop duo’s presence and energy was unsurpassed the entire festival weekend. That combined with eye-rattling bass and some of the catchiest hooks in modern rap made an explosive concoction rarely heard outside of the classic hip-hop of the 90s.

But it was more than rambunctiousness and fun, another similarity RTJ has with the 90s golden age is being hip-hop performers with a message, like Public Enemy and Nas. Throughout the night the duo (Killer Mike and El-P) discussed losing a loved one, following your dreams, and suicide prevention.

“If any of you ever lost anyone you care about,” El-P said. “Close your eyes during this next song and pretend they’re standing next to you.”

However this consciously-charged delivery wasn’t too much of a break from the norm for the rappers, considering just last year Killer Mike opened for Bernie Sanders’ presidential campaign.

A Run the Jewels live show can be rowdy inspiration to anyone: aspiring musicians, depressed youth, even middle-aged adults who’ve lost their groove will start rocking again when they see two rappers, both 42, dancing their asses off on stage.