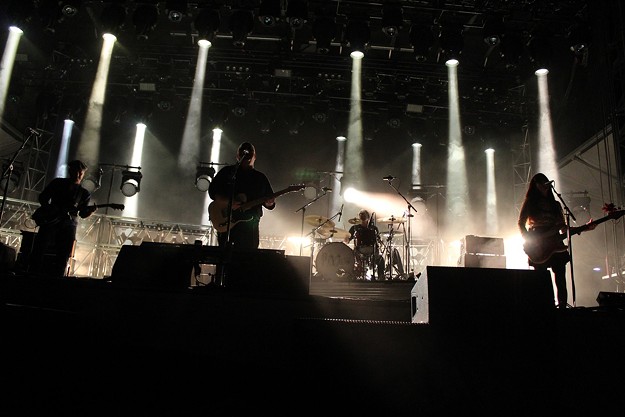 Jeff Gardner
When the crowd cheers at the intro of every song, you know the band is doing or did something right. In this case it’s both.

From blistering noise-rock to sweet and sentimental ballads, Pixies’ show at Lost Lake spanned their entire career. There was so much music for them to cover they rarely had time to speak between songs; in fact they didn’t at all. There wasn’t a single non-musical word spoken the entire show. This may have given a feeling of disconnection from the audience if it weren’t for the crowd singing along to every word.

This standoffishness does however, fit the lunacy of their music: they don’t take their songs too seriously, so why treat their concerts any different? Besides, when you’re a band that large and influential, and with so many classics in your repertoire, you don’t have time to talk, nor is talking necessary.

Not to say the songs were uninteresting or the same as they’ve always been: frontman Black Francis sang most songs with a different pacing and inflection than what listeners are used to on the albums. Not only did this make their classic hits sound fresh, but it caught the audience off guard and had them listening for the changes to come. If the audience was sitting down instead of thrashing about, they’d be on the edge of their seats.

So in the end, you’re left with a great band playing the hits, and an eager crowd of thousands singing along and not wanting it to be any other way.

Run The Jewels Put Meaning Behind The Mania At Lost Lake