The Weekly List: 15 Things To Do in Tucson in the Next 10 Days

Your Weekly guide to keeping busy in the Old Pueblo.

Earth Day at Biosphere 2. Our favorite terrarium is celebrating Earth Day with a full-day festival that will include talks about local food, energy, water and the environment, as well as a look at what’s happened at the Biosphere since the University of Arizona College of Science took it over 10 years and a look at what’s planned for the next decade, including a groundbreaking for a new farm inside Biosphere 2. You’ll also have food trucks to fill your belly, ladybug and hermit crab releases to entertain the kids, and a sunset concert by Calexico to cap off the day. The fun starts at 9 a.m. at Biosphere 2, at the intersection of Oracle Road and Biosphere 2 Road.

Rally for Science Tucson. With the Trump administration’s ongoing efforts to deny climate change and otherwise cut research funding, scientists are taking to the streets to protest. Tucsonans will be joining other cities around the nation who are marching for science (although in Tucson, they’ll be doing a rally instead of a march because getting there was too much red tape to get a permit for a march). You’ll find speakers, science booths, entertainment and more from 10 a.m. to 2 p.m. Saturday, April 22. El Presidio Plaza Park, 175 W. Alameda St. Free.

DIY Wedding Centerpiece Workshop Part 1. If you are looking for ways to stay green on Earth Day but don't want to get too muddy, this is the event for you. Green Things will be hosting a DIY Wedding Centerpiece Workshop where you can make your own centerpiece using your favorite succulents and more! The only catch is that you have to pay for your supplies at the event. 10 a.m. to noon Saturday, April 22. Green Things, 3384 E. River Road. Bring money for supplies.

Pima County Fair. The annual 11-day hootenanny that is the Pima County Fair kicks off Thursday, April 20, with all the usual fun—a senses-shattering carnival, all those cute critters in the 4H competition, arts and crafts created by your neighbors in Old Pueblo Hall, big fat turkey legs fresh from the grill and so much more—as well as a special concert by T-Pain and Naughty by Nature. The fun continues through Sunday, April 30, with more concerts—including the Village People on Tuesday, April 25, and Septima Banda on Saturday, April 29—and plenty of spectacle. Grab the family and head out the fairgrounds, 11300 S. Houghton Road. The main gate opens at 1 p.m. Monday through Friday and 10 a.m. Saturday and Sunday. Tickets are $8, $4 for kids 6 through 10 and free for anyone younger. For more info, call 762-FAIR.

Kids Fix It! Parents and kids can learn how to maintain a child's bike without having to send it in for repairs every time something breaks. If your child loves to ride his or her bike, make sure they get as much mileage as possible out of it! Register for the class at bicas.org. 9-11 a.m. Sunday, April 23. BICAS, 44 W. Sixth St. $20.

Cheba Hut's Annual 4/20 Party. If you're celebrating the stoner's Christmas, then head out to Cheba Hut for live music, games and eating contests. All food will be $4.20 and drinks will be provided the entire day—you can even play beer pong for as long as you want. So grab your favorite munchies and join Cheba Hut in their annual party of their favorite product. 10 a.m.-midnight Thursday, April 20. Cheba Hut, 1820 E. Sixth St. Bring money for food and booze.

Israel Carnival. Join Israel with Wildcats and support the Save a Child's Heart Philanthropy with this fun-packed festival. Some activities on deck are henna tattooing, raffles, bounce houses and photo booths. You can also munch on some falafel and sip on Israeli beer at a bar. 6-8 p.m. Tuesday, April 25.1245 E. Second St. $2-$3.


Baja Beer Festival. This festival will feature 50 breweries and 200 craft beers on tap, along with food vendors, live music and lawn games to keep the party rocking. All the proceeds go toward the Northwest Firefighters Charities and the Arizona Craft Brewers Guild. 5-9 p.m. Saturday, April 22. 4502 N. First Ave. $15 for designated drivers, $40 for 20 tasting tickets and $60 for 25 tasting tickets, a food voucher and a VIP area. If you're quick (and lucky!) you might be able to win some tickets here.

Parks and Recreation Trivia Night. “Any dog under fifty pounds is a cat and cats are useless.” Think you're the biggest Parks and Recs fan in Tucson? Well, go find out by playing their ultimate trivia game and “TREAT YOSELF” with some food from the YouSlyDog food truck. Bring your A-game and if you're in it to win it, then you better believe Ron Swanson will be proud of you. 7-9 p.m. Tuesday, April 25. Casa Video and Casa Film Bar, 2905 E. Speedway Blvd. Bring money for food.

Spent Saints. TW arts and entertainment editor Brian Smith’s new collection of intertwined short stories, Spent Saints, is flying off the shelves—and for good reason: Smith mashes up Raymond Carver, Hubert Selby Jr. and Iceberg Slim but ends up with a voice all his own, telling stories of quiet desperation and occasional redemption that will hook you right on the first page. He’ll be reading from book at 2 p.m. Sunday, April 23, at Barnes and Noble, 5130 E. Broadway. Free, but be a decent human being and buy a copy of the book.

Jenny and the Mexicats. A jazz kit played with sticks and mano, an upright bass tattooed with comely women, jaunty Caribbean-influenced acoustic guitar and a beautiful blond siren with, yes, a trumpet. Do you wanna dance yet? Jenny will lure you in with her bluesy no-nonsense voice. She doesn't want to work, just to dance. This relationship is torture. It's just plain better in Buenos Aires. And always her case is compelling, the music a perfect dance in and of itself, pieced together like good jazz—every player counts. Jenny's from Britain but her Spanish is impeccable, the drummer is from Spain and the strings are from Mexico, but this group is original, like Manu Chau without the political agenda or a killer ska combo minus the kitsch. They are independents and the sum of their parts is from a land of heart and strong, quick rhythm. At Club Congress, 311 E. Congress. Saturday, April 22; 7 p.m. $8. 21+.

The Wailers. It's been five years since the world's most legendary reggae band played Tucson. Still led by Aston Barrett, still repping the most faithful and spirited renditions of the late, great Bob Marley's songs and often full-length albums, The Wailers can hardly be called a nostalgia act. Their incredibly tight 2-4 rhythms and genius pop melodies, perhaps the most recognizable worldwide only third to the Beatles and Stones, are always offered up with reverence for the listeners and the Prophet and the soulful charge of the music itself. "If you know your history, then you will know where I'm coming from." Rediscover the I-and-I vibrations from as close to the source as we can get this side of Mount Zion. With DJ Jahmar International at Rialto Theater, 318 E. Congress. Sunday, April 23; 8 p.m. $18-$25.

Gaza Strip. Longing for the simpler days before boring high-gravity microbrews and limp lumberjack clones, when shitty facial hair was not an ironic statement but merely a signifier of true inner loathing? Then the kill-riff blast of Gaza Strip is all for you. See, there’s a poetic simplicity in their groin-deep basslines, thunderous rhythms and throat-ripping choruses. Gaza Strip have been together long enough (two albums, new one coming) that they're a kind of fringe-punk (with metal and art-pop overtones) nostalgia act that never needed to make it. Like a network re-run you count on; you might not even have liked it when it first came out, but by now the plotlines and senseless car chases have kept you company on sleepless nights while you’re folding laundry. Check your pretensions at the door and catch a fiery set from this heroically constant combo, one of Tucson’s finest. On Thursday, April 27 at The Flycatcher, 340 E. Sixth St. With Bryan Thomas Parker, Shooda Shook It and The Unday. 21+. 9 p.m. Free.

Twin Peaks. You've played VU's Loaded so damn often you got the box-set extras down. Those ambling jangle guitars nailed down tight by a straight-up R&B groove drums … You are both bored and exhilarated strolling suburbia looking for whatever shit comes your way. So here's the sweetly named Twin Peaks from Chicago, dudes all twisted up in a post-Velvets, post-Beasties world. (Wait. It’s good!) And the singer has got be more grating than flat to pull off the malcontent thing in these times—oh, but those fleeting moments of fucked-up doo-wop let you know he can sing. Zappa would approve. "Making Breakfast" is as profound as it is silly. And that "Butterfly" video, rolling five deep through the tombstones thinking about getting it on? Here’s a band that reminds us of the mundane joys of just being alive. What was that talk of suburbia before? Never underestimate. Go see ’em, fresh from Coachella. With Chrome Pony and Post Animal Tuesday, April 25. 191 Toole. 8 p.m. $13. All ages. 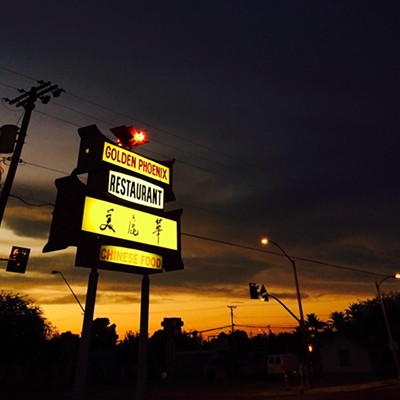 Streets of This Town: Phoenix Rising