SXSW Day 1, Or: How I Learned to Stop Worrying and Love the Data 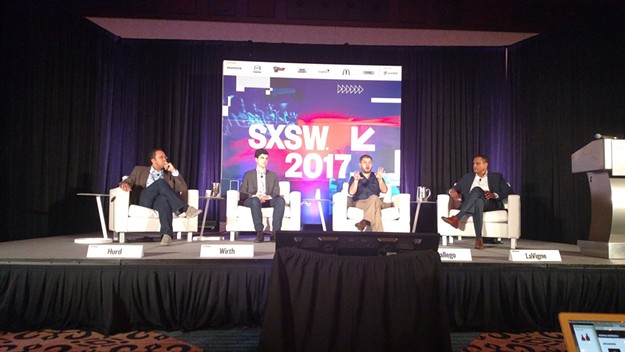 Nick Meyers
From left: Rep. Will Hurd, R-Texas; Quorum Co-Founder, Alex Wirth; Rep. Ruben Gallego, D-Ariz.; and Iron Bow CEO, Rene LaVigne discussing the use (or lack of use) of data in government and how private companies can help fill in some of the gaps at SXSW 2017 on March 11.


I am not an entertainment journalist.

So imagine my surprise when my editor offered me the opportunity to go to South by Southwest to relay to our beloved Tucson community the performances of the most up-and-coming bands appearing at what is, traditionally, one of the most popular music festivals in the world.

Well, lucky for me, SXSW has much more to offer than the insurmountable schedule of bands and music artists with tracks offering ideas on everything from making music, television and style, to tech, startups and virtual reality, to government, social impact and yes, journalism.

While the music scene doesn’t explode until Monday, we were able to cajole our way to access for all of the festival’s events, and that’s what yesterday was all about. Though much of the day was spent finding our footing, we did manage to make it to some enlightening panels.

Being the journalism and public policy nerd I am, I decided to pop into a panel on “Opening Up Government’s Vault of Data.” This turned out to be an appropriate choice since after I sat down I discovered Rep. Ruben Gallego, D-Ariz., was one of the panelists.

He was joined by Rep. Will Hurd, R-Texas, chair of the congressional Information Technology Subcommittee, and Alex Wirth, a Harvard grad “whiz-kid” and co-founder of Quorum, a website that aggregates legislative data.

The panel was moderated by Rene LaVigne, CEO of IT company Iron Bow and an expert on the intersection of technology and government.

Much of the conversation revolved around the ineptitude of the current congressional representation to effectively use technology to create effective policy and maximize transparency when it comes to the drafting of legislation.

Wirth especially made the point that this is an opportunity for entrepreneurs to play a role in increasing government accountability, leading by example.

Though barely missing out on inclusion in the Millennial generation, Hurd and Gallego joked about how other congress members often come to them for advice on the constantly changing fringe of technology.

With a degree in computer science, Hurd said he could more easily identify the missed opportunities for Congress to employ technology in tracking changes to legislation and government services such as census data.

Gallego commented on the disconnection between iterations of the census, such as the switch of demographic identification form “Spanish” in the mid-1900s, to “Hispanic” in the 1990s, to “Latino,” which appears on today’s census forms.

While all panelists admitted that the government may have once been on the cutting edge of technology, it’s slow to adapt in the modern age.

As such, Gallego urged audience members to petition their local and state governments to start using better methods of tracking data, both for the public’s use and their own in creating policy and government programs to better serve its citizenry.

In today’s especially polarized political pond, accountability is increasingly important. Aside from the terrifying concept of government hiding data from citizens, equally terrifying is the refusal to track and document data that we may not know we need until it’s too late.

While the government may track statistics on citizens through social welfare programs, academic performance and criminal record to better determine which policies should be implemented, this sort of data is important to the public in making sure the government maintains the sovereignty of the people.

Increasingly, it seems that it’s the responsibility of private companies to provide the services that the government won’t. Or perhaps that’s just the sentiment influenced by the nature of SXSW. Either way, we’re left with a decision.

The government will be tracking this sort of data on us one way or another, the question is, how are we the people going to use it?

Advice on Welcoming Immigrants, From SXSW

GoT Stark Mavens and the Double Ds