A history lesson: By definition, Burlesque is a literary, dramatic or musical work meant to humor, and challenge by it’s ludicrous treatment of subject matter. The word derives from the Italian word burlesco, meaning a joke, ridicule or mockery, popularized during the Victorian era ... like any great art it was reactionary and had some sexual tension.

Said art form has grown from the ribald of Lysistrata to neo-burlesque—a subtype that allows the performer to use their bodies and costumes to deliver a political or social statement.

Today's burlesque has a wider arc. Encompassing a range of performance styles. From the Folies Bergeres and the Moulin Rouge, the classic tease of vedette Gypsy Rose Lee to the contemporary hussy-glam of Dita Von Teese, the latest in a line of great performers spanning centuries, and everything imaginable in between.

And so it was, last Thursday night at the Rialto Theater when a conglomeration of revelers gathered to celebrate the 11th Anniversary of Black Cherry Burlesque, Tucson’s longest running burlesque show.

Moments of elegance and beauty—when a graceful dancer glided upon the resplendently lit stage costumed with the incandescent wings of an angel—were tempered with those of hilarity. As when a vivacious performer finished her act by igniting her twirling pasties, Flores quipped, “Shit, this bitch just set her titties on fire,” adding, while twisting a lock of curly hair around her fingers, “There is so much hairspray in this shit...poof!”

Black Cherry started as a troupe run by Inga Kaboom and Stephka Von Snatch after Kaboom saw a traveling burlesque show and was inspired to create a show based here in Tucson. The burgeoning troupe performed almost exclusively at The Surly Wench (on Tucson's 4th Avenue), but has evolved a lot over the years. Torch (née, Emilie Marchand), Black Cherry Burlesque’s producer/president, says, “We currently operate as a production company [and] strive to offer a platform for burlesque artists of all types and backgrounds to express themselves without censorship. We encourage people to tell a story using this art form .. to really connect with the audience in a unique way.”

With a background in music, theater and modern/interpretive dance, Torch adds, “I'm very influenced by Weimar era cabaret and old movies featuring Marlene Dietrich. That's what motivated me when I first started burlesque. But my influences outside of that are varied. Everything from Bob Fosse to PJ Harvey. I love old movies and musicals, punk rock, ballet … Honestly, I'm influenced by anything that really moves me and that comes from so many places.”

Over the years, Black Cherry Burlesque has shared the stage with local musicians and DJ's and burlesque performers of note: Satan's Angel, La Cholita, Miss Astrid, Scotty The Blue Bunny.

Southern AZ COVID-19 AM Roundup for Wednesday, April 21: New cases remain on a plateau; Here’s how to set up vaccine appointments
Top Stories


As for the future, “We currently only perform at The Rialto and 191 Toole but we'd like to travel more,” Torch says.

Black Cherry Burlesque lit the stage with dazzling artistry, sultry acts, slamming music and moments of social consciousness, and provided the audience with an unforgettable party to commemorate the occasion.

“An all around great time!” Torch says. But of course.

'Enemy of the People': The Phrase's Ironic and Instructive Literary History

Song of the Day: Billy Sedlmayr on Watching Someone Roll His First Kid Joint to Grand Funk, and 'We're An American Band!' 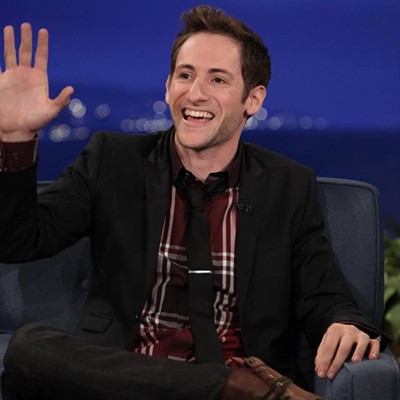 Make This Tucson Burlesque Book a Reality, Get Rhinestone Pasties