Hitler: America Is Weak Because It's Not White Enough

Hitler wasn't too worried about the U.S. getting involved in World War II, according to a column in the Sunday New York Times.


“I don’t see much future for the Americans,” Hitler said in January 1942. “Everything about the behavior of American society reveals that it’s half Judaized, and the other half Negrified. How can one expect a state like that to hold together?”

Man, was he lucky the U.S. hadn't decided to make itself whiter or he could have been in real trouble.

That was 1942. Since then, we've gotten even more Judaized and Negrified, not to mention our increasing Mexicanification. And what about all those Asians?

The 75-year-old quote is sounding more current these days with the recent emergence of white supremacists into the political mainstream. I'm sure I wouldn't have to dig very far to find a similar statement delivered from a podium by a clean-cut white guy in a suit, or in an article on breibart.com.

No, I'm not saying Trump and his followers equal Hitler and his followers. Like the saying goes, History doesn't repeat itself, but it rhymes. What we may have here is a racist, antisemitic rhyming couplet.

Song of the Day: ‘The Corridor’ by Don ‘Doop’ Duprie

Cinema Clips: Manchester By the Sea

Claytoonz: Stand Back and Stand By 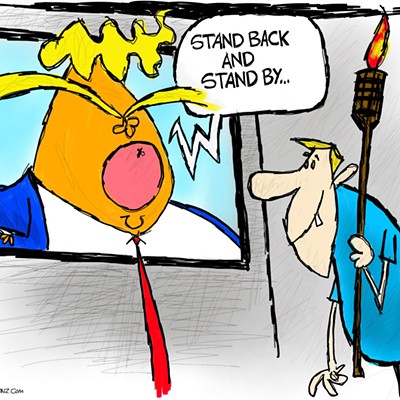