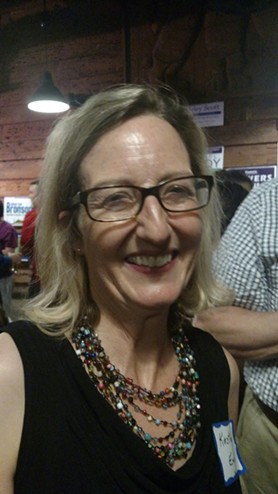 Nick Meyers
UA law prof Kirsten Engel wins the first round of her rookie run for office, but now faces Republican Todd Clodfelter in one of the most competitive districts in the state.
In the competitive legislative House races tonight:

• Rosanna Galbadon and Daniel Hernandez lead the race for two House seats in Legislative District 2, which runs along the Santa Cruz River from downtown Tucson to Nogales. Aaron Baumann is running third.

While the district is Democratic-leaning on paper, Republican John Christopher Ackerley won a House seat two years ago in an upset victory. Now Ackerley will have to see if he can hang onto the seat in a presidential election year.

• In Legislative District 9, challenger Pamela Powers Hannley was knocking out incumbent Rep. Matt Kopec, who was appointed to the LD9 seat earlier this year by the Pima County Board of Supervisors.

Powers Hannley, who said she'd be sending back $1,000 of the Clean Elections public financing she got for her campaign, said she often won over voters she talked to with her left-leaning politics. "Sometimes all is have to say is that I'm a progressive," she told TW correspondent Nick Meyers tonight.

Kopec was disappointed in the results but said he "ran the program I wanted to."

Rep. Randy Friese, who is wrapping his first term, was outpolling both of them in the race for two House seats.

Friese and Powers Hannley will face Republican Ana Henderson, a business owner and political newcomer, in the November election. She has already qualified for Clean Elections funding.

LD9, which includes central Tucson, the Catalina Foothills and the Casas Adobes area, is one of Arizona's most competitive legislative districts and elected a Republican, Ethan Orr, for one term as recently as 2012.

Engel said the other candidates pushed her to be the best she could be and credited her strong showing to the her focus on education and environment . "I picked the right issues to focus on, the issues I can best represent," said Engel, a former environmental lawyer with the Sierra Club and the Massachusetts Attorney General's Office.

Frogge said she was a team player and would support the other Democrats, "no matter what the outcome," and said she'd remain engaged with the Democratic Party.

Mach said "the real battle for me is the general election."

LD10, which includes central and eastern Tucson, is also one of the most competitive in the state. Republican Todd Clodfelter, who has run for the seat previously, has already qualified for Clean Elections funding.

Congress: Heinz Up Over Steele in CD2 Dems, Babeu Up Over Field in CD1 GOP Primary