As Acacia Prepares to Shutter, Chef Albert Hall Looks to the Viability of Fine Dining in Tucson 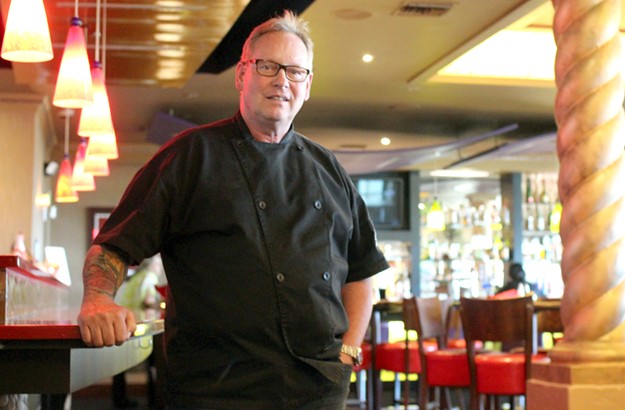 Heather Hoch
Chef Albert Hall prepares to close his restaurant after 11 years in business.
Chicago's Alinea went to a ticketed system, ditching the standard reservation system. Other James Beard award winners, like Chez Panisse in Berkeley, have done away with tipping. It seems no matter where you look, fine dining restaurateurs are tweaking the typical protocol in order to find a system that works across the board: a good quality to price ratio for guests, a fair wage and sane hours for employees and a workable amount of cash leftover for the owner.

It might sound simple just to list those three things, but achieving them, especially in a town like Tucson where the median household income is about $5,000 less per year than the rest of the state and about $10,000 less than that of the U.S. as a whole, is another story entirely.

That's where chef Albert Hall comes in. At 60 years old, he's been in kitchens for 45 years and has seen some dramatic shifts—particularly in the last 11 years while his fine dining restaurant Acacia was in business. But, on Sunday, May 15, Acacia is closing its doors for good.

When the announcement that Acacia planned to close was made in February, many articles said approximately the same thing, culled directly from the restaurant's press release:


“It has been our great pleasure to have served the Tucson community since 2004”, said Chef Hall. “In the years since, we have been blessed by the many extraordinary friends and acquaintances who have enjoyed countless meals and good times at Acacia. We hope that everyone will stop by and enjoy their Acacia favorites over the next few months. We will hold a grand finale event on Sunday, May 15th.”

But behind that sunny media-ready quote is a man preparing to say goodbye to his preteen child.

"I haven't begun to disconnect myself from the restaurant," Hall says. "I'm sure it will be an emotional last day."

Hall's restaurant, which was previously located in St. Philip's Plaza but then moved to a space with lower overhead cost across from La Encantada, isn't prohibitively expensive by any means. In fact, if the dinner menu, which has entrees ranging from $24-$42, begins to burn holes in your pocket, Hall offers a less expensive lounge menu (priced around $10-$15 per plate). And that's just one of the many things he's done to try to make fine dining work.

"In hindsight, I wish we had downsized," he says, mentioning that he's toyed with the idea of a small, 24-seat restaurant.

To Hall, fine dining is about standards first and foremost—sourcing for quality and focusing on local, organic ingredients is side-by-side with paying even his dishwashers above minimum wage. It's about next-level service, which means keeping employees happy, but it's also about making sure the restaurant itself is spotless. He challenged me to find a dust settling anywhere in his restaurant and assures the kitchen is even cleaner.

With all of that in mind, it seems like he's doing it right, right? It seems like it should all be falling into place. Instead, though, Hall is preparing himself for an extended vacation after his restaurant closes to think about what he wants and what the future for a chef near (but not near enough) to retirement looks like.

"I have to be really honest with you: I don't know," he says. "I don't want people to feel sorry for me, but at 60 years old, it seems I'm too old to be marketable...I've never been unemployed."

While his heart seems to still be in fine dining, he concedes that the market never quite bounced back from the recession and more casual restaurants tend to win out today. Though the recession saw folks increasingly willing to pay $10, $12 or $15 for a craft cocktail, asking $32 for a locally-raised grassfed steak entree became pretty much out of the question. Despite the hype food trends pushed by modern restaurateurs and the media alike, Hall says the main difference between his menus 11 years ago to his current menu is simply the price point.

"You have to be more of a business person than a creative force.”

Even in downtown's bustling restaurant renaissance in the middle of the last busy season you could see proof of what Hall's referring to. More casual, inexpensive restaurants like the HUB stayed packed night after night while places like Reilly and Penca, which Hall says have a fantastic product, weren't nearly as consistently full.

“I think what people expect fine dining to be in the future is something like Pastiche or Commoner [& Co.] or The Parish,” he says. “I think I’d have to lower my standards.”

That's not to say he doesn't enjoy those restaurants necessarily, but they aren't really what he considers fine dining to be.

“People have come to think of Acacia as a special occasion restaurant, which can be the kiss of death,” he says. “We buy only the best stuff. People who know Acacia know that.”

Add on top of that the fact that Tucson restaurants experience a massive hit during summer, it began to make sense for Hall to close Acacia in May.

“If you don’t have a bunch of money stored up for summer, you won’t make it. Business from May to June for us goes down 55 percent,” Hall says.

It seems even Hall himself understands, to some degree, that sympathy for the fine dining restaurateur might not be the easiest to drudge up. Instead, think of him more as a local business owner, trying to support local farms and pay his employees well without compromising his standards. Will he open again? "Oh yeah," he says. "This isn't the last you've seen of me.

Still, he finished, unsure but determined, by saying: