Grapes in Winter: Have We Sold Our Souls (or The Earth) To the Devil?

I hadn't revisited Dr. Faustus by Shakespeare contemporary Christopher Marlowe since I read it as a high school junior, but I often think of it when I walk down the produce aisle in winter and see fresh grapes and berries on display. After my most recent visit to Sprouts, I decided to take my first look at the play in decades to see if my memory was accurate. Turns out it was.

I remember two things from my high school reading of "Dr. Faustus," which retells the old legend of a doctor who sells his soul to the Devil in exchange for power and knowledge. I remember the first lines of a passage I had to memorize, where Dr. Faustus asks Mephistopheles to conjure up Helen of Troy. On seeing her, he says,


Was this the face that launch'd a thousand ships,
And burnt the topless towers of Ilium—
Sweet Helen, make me immortal with a kiss.

And I remember a brief scene where Faustus is showing off, using his devilish powers to perform parlor tricks for a Duke and Duchess. The Duchess asks for a dish of grapes even though it's the dead of winter. No mortal could produce fresh grapes at that time of year, but Mephistopheles leaves and returns a moment later with the fruit, which the Duchess says are "the sweetest grapes that e’er I tasted." When the Duke asks how he did it, Faustus replies, Mephistopheles sped to the far east where it was summer and brought back the grapes.

Sprouts sends trucks, not the devil, which only have to travel to Mexico, not the far east, to conjure up summer fruit in winter. Faustus summoned spirits from the underworld to do his bidding. We summon coal and oil from beneath our feet and use it to fuel the technology that does our bidding. Faustus' bargain was, he would live a life impossible for any other mortal, but he would lose his soul in the process. Our bargain is, we live lives which would have been impossible for any mortal who lived before us, but we're in danger of losing our planet, or at least our ability to live on it, in the process. Faustus put the health of his soul in peril to feed his desire for power and luxury. We endanger the health of the Earth.

Think of the wishes granted us that would have been unthinkable to anyone a century ago. "Give me exotic fruit and produce in winter." Give me any food I desire whenever I want it, which I can heat in my own home in a matter of minutes." "Make me cool on the hottest days of summer." "Let me travel faster than a leopard." "Let me soar higher and faster than a falcon."

Nothing could be easier than to have those wishes granted. We accept those miracles and many more without a second thought. All we have to do is harness the power of fossil fuels, then spew their waste into the air we breathe, and we can have it all.

A Helen-Conjuring Note: Faustus needed Mephistopheles to bring Helen of Troy to his side. We can conjure virtually any famous Helen or Adonis into our rooms—in still life, in motion, sometimes in flagrante delicato if we wish—by clicking a remote or tapping a screen. We can't have a Helen or an Adonis as our lovers as Faustus did, not yet anyway. We'll have to wait awhile for virtual reality or robotics to get a little more sophisticated.

Zona Politics: How Will Climate Change Affect Us in the Years To Come?

Claytoon of the Day: Freedom Gas 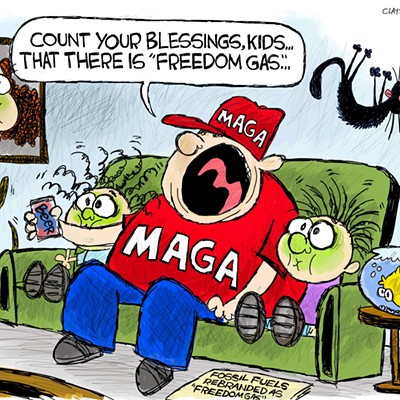