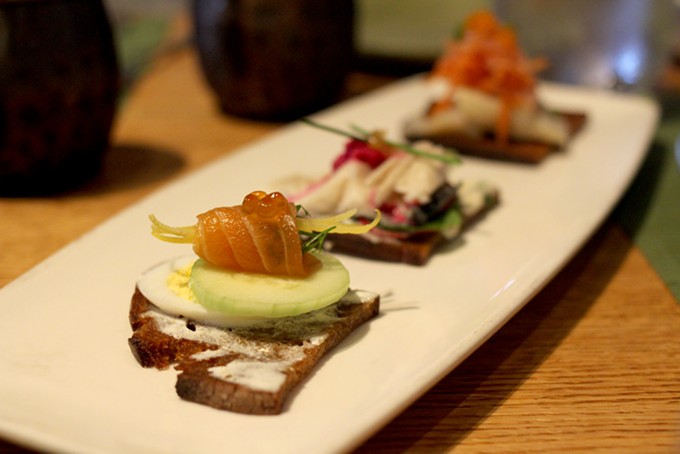 Heather Hoch
Smoked fish took center stage atop Barrio rye bread for one of the starters on Downtown's Moscow menu.
Sitting down to experience the most recent iteration of Downtown Kitchen + Cocktails' Around the Globe menu series, which gives diners the chance to experience some of the flavors of Moscow, the general consensus seemed to be one of both excitement and, honestly, a little confusion or trepidation. While the American culinary zeitgeist grows to include more and more cuisines and cultures, it seems like overall Slavic food is still largely left out. Finding a good pierogi in Arizona is hard enough.

So, although in the past the menu has gone from Buenos Aires to Hanoi to Mexico City and, most recently, Istanbul, it seems both chef Janos Wilder and chef de cuisine Devon Sanner agree that tackling a Russian menu was one of the less straightforward choices. Like any cuisine, though, quality ingredients, meticulous preparation and a little (or a lot) of R&D will get you started on the right path.

Sanner has been working on the Moscow menu for about three months. As a former Russian literature major turned chef, Sanner speaks Russian and has visited the country in the past, but even with that experience, he had to hit the books, so to speak.

What resulted was a three course menu with your choice from three appetizers, three entrees, two desserts and optional additional cocktails or wine. The menu also includes, of course, a vodka tasting flight with rye, wheat and potato vodkas to sample, showing off the more subtle variety in the white spirit. On the cocktail side, black currant, vanilla and blueberry add some richness to vodka in the Moscow Black and Blue. 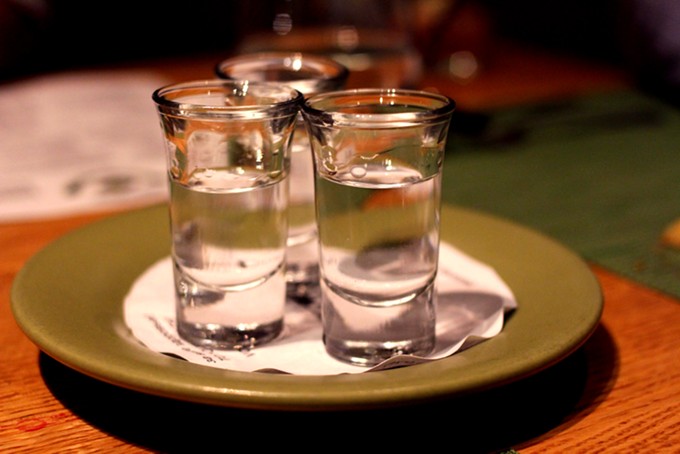 Heather Hoch
What's a trip to Russia without the vodka?
Starting off, you have your choice of a simple sour cream soup with beet puree, radish, dill or salmon roe, a three-part Barrio rye bread based open faced sandwich (or zakuski) with smoked and marinated fish and crispy pork torchon medallions with cherries and expertly spiced and brined beets. The latter of the three is a play on the traditional kholodets, which is a meat in aspic dish that Sanner compared to "meat ambrosia salad."

Wilder and Sanner both agree that translating a cuisine to suit palates stateside takes a little more than a strictly traditional reading. Rather than forcing diners to eat jellied meats they probably won't like, both chefs opt to incorporate the flavors and spirit of a cuisine, without limiting themselves with a completely literal menu. After all, Sanner says the Russian cuisine is kind of having its own identity crisis as it tries to bring itself into a more modern setting, while appealing to visitors and locals alike.

The main courses feature offer three very different experiences. The street food inspired beef shashlyk with red wine and pomegranate marinated beer shoulder, flatbread from Caravan, grilled vegetables and eggplant puree is a hearty, humble dish. On the other hand, the Chicken Croquette Pozharskij (one of the few Russian dishes to be named after a Russian chef, Sanner adds) offers a more decadent experience with marsala and porcini cream. Finally, a griddled rainbow trout gets kicked up with a bacon and braised cabbage filling with buckwheat piaf, housemade farmer's cheese and a tart cherry sauce.

To finish, velvety vanilla custard with accompanying berries and tea cookies or a warm, light apple cake with blueberry buttermilk ice cream will end the unique meal with something sweet.

Working as the opposite of Wilder's popular Sense of Place menu in the winter, which gives visitors and locals alike the opportunity to try a taste of something truly Sonoran, the Around the Globe menu is a chance for locals to go on a culinary excursion without having to pay for travel. After all, travelling is really about the food anyway, right?

As with Wilder's whole take on his Downtown restaurant, the menu is affordable at $33 or $36 for three courses, depending on which entree you have. The menu can also be served a la carte. The Moscow menu at Downtown (135 S. Sixth Ave.) will run until August 3 when a Jamaican-influenced menu by way of Kingston will take over the restaurant.