The death of Mexico native José de Jesús Deniz-Sahagún at the Eloy Detention Center has been ruled a suicide by the Pima County Office of the Medical Examiner, according to a write up from earlier this afternoon by Paul Ingram of the Tucson Sentinel.

Deniz-Sahagún was found dead in his cell on May 20. Gregory Hess, the chief medical examiner, found he died of asphyxiation after shoving a knee-high sock down his throat. A small white plastic handle, probably from a toothbrush was found in his stomach, the Sentinel article says.


There were no other injuries to Deniz-Sahagun's mouth, face or neck. A minor scalp injury found on the body could have come during an arrest, or when Deniz-Sahagun was restrained by officers, said Hess.

One day before his suicide, Deniz-Sahagun was evaluated by a mental health provider for "delusional thoughts and behaviors for which he had to be restrained by corrections staff," the report said. Believing that Deniz-Sahagun had suicidal thoughts, officials placed him on a constant watch.

The next day, officials removed the watch order and placed Deniz-Sahagun in a single person cell with regular 15 minute security checks, Hess said.

Video footage of the cell made available to Hess shows Deniz-Sahagun at his cell door at 4:57 p.m. Then at 5:33 p.m. emergency medical personal enter the cell. The video shows that in the hour before his death, officers checked on Deniz-Sahagun four to five times.

Emergency responders attempted to revive him, but were unsuccessful, said U.S. Immigration and Customs Enforcement.

"U.S. Immigration and Customs Enforcement (ICE) just received a copy of the Pima County autopsy report which determined the death of Eloy detainee Jesus Deniz-Sahagun was a suicide. In accordance with ICE policy, the circumstances surrounding every detainee death are subject to review by the ICE Office of Professional Responsibility (OPR) and an OPR inquiry has been scheduled for later this month," said a statement from ICE sent this evening. "ICE is committed to ensuring the safety all those in its custody. As such, OPR will be reviewing the Eloy facility’s compliance with ICE standards and policies, including those relating to suicide prevention and intervention.”

The statement says ICE officers visit housing units regularly to check out the living conditions and make sure they are in compliance with the agency's detention standards, and that there is full-time staff in place for medical and health needs, as well.

According to the agency, the Eloy Detention Center has been inspected six times since 2012, and has been deemed in compliance in each occasion.

Deniz-Sahagún's death was one of many issues that triggered about 200 detainees to declare a hunger strike over the weekend. They alleged they witnessed guards beat Deniz-Sahagún and then put him in solitary confinement.

Four deaths have been reported by Immigration and Customs Enforcement this fiscal year, and a total of 14 since 2003, according to the agency.

The Arizona Biennial 2015 Artists Have Been Chosen

Homeland Security's Inspector General: Agency Has Little to No Data on How It Uses Prosecutorial Discretion & That's Bad 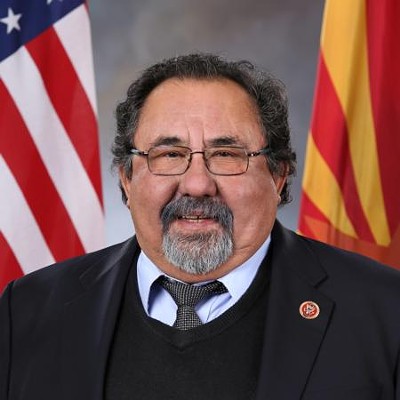