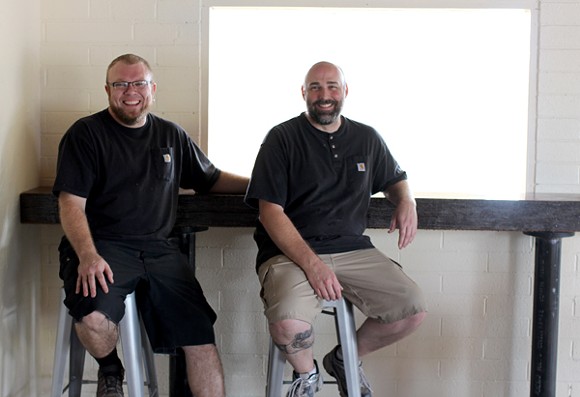 Heather Hoch
Alvin Kuenster and Brian McBride are looking to bring the downtown vibe out east.
Eastside dwellers are about to get their very own craft beer and wine bar called Arizona Beer House. Ran by longtime friends Brian McBride and Alvin Kuenster, the bar and bottle shop seeks to breathe some new life in the area of Kolb Road and Broadway Boulevard.

"With all of the attention on downtown right now, we're just trying to bring something to the east side that has that downtown feel," McBride says.

The duo, along with Kuenster's wife and McBride's brother, are looking to open by the end of June at 150 S. Kolb Road if everything goes as planned. McBride says he's been looking to open the bar for a while, actually, but just finally took the plunge.

"I've been talking about it for years and years and I finally said to my brother, 'I'm done talking. Let's start looking for a building,'" he says.

Starting out, the bar will offer 30 craft brews on tap with a focus on local breweries, though McBride says they're also likely feature west coast breweries as well. Bottles of Arizona wine and draft craft soda will also be available.

Although the pair doesn't have plans to serve food, they are looking to team up with neighboring restaurants and bring in food trucks to satiate hungry imbibers.

In terms of the general aesthetic, it seems Arizona Beer House is looking to emulate other popular downtown bars. McBride says the bar won't have TVs but will have a variety of "old pub games" like darts. They have also been speaking with Scott and Rebecca Safford of Tap & Bottle for advice and inspiration.

"They've been so supportive of us. Everyone has been really welcoming," McBride says. "Tucson has a great craft beer community."

That community includes, of course, the brewers who McBride says are excited to see their beer featured elsewhere in Tucson. To stay up to date with Arizona Beer House's progression, you can follow the bar on Facebook.

YWCA: Jeff Flake Should Get on Board with End Racial Profiling Act