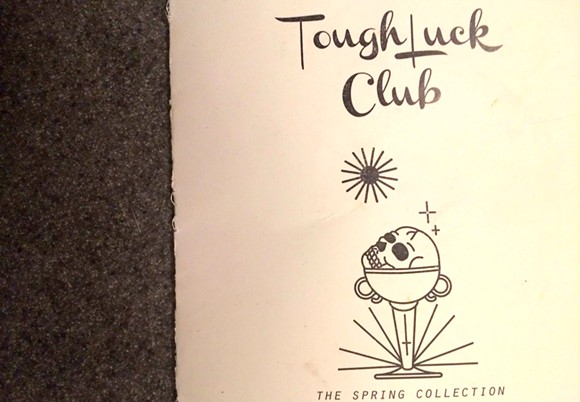 Heather Hoch
Get ready for four more pages of tough choices from the bartenders at Tough Luck Club.
Friday night marked the release of Tough Luck Club's new cocktail menu. Like the last, it's a four page zine-style booklet complete with cocktail recipes. However, according to bartender Niklas Morris, what sets this new menu apart is the bar coming into its own.

"The bar is finding its identity," he says. "First menus are usually about equal parts status quo and shock and awe, with the second you can begin shaping the bar."

Morris compares this process to a comedian workshopping jokes, and, like the first menu, this new one is not short in humor. The This Is Heartbreak, for instance, is a drink named to reference the fact that the bar has a no Morrissey/The Smiths rule. While the name might be a little silly, the drink itself is a seriously tasty blend of genever, sweet vermouth, Bonal and Creme de Noyaux.

However, the menu isn't all that's new at TLC. Morris says the bar plans to roll out two new programs: the Acid Cat Spirit Guide and the Culinary Experience.

Heather Hoch
The This Is Heartbreak will leave you happy.
The Acid Cat Spirit Guide will launch next Friday, April 24 and will be "like an inverse bartenders choice." The bartenders will each have their own special secret drink. You don't get to know what's in it, it will "actively change" in terms of flavor as you drink it and it will look nothing like what it tastes like.

On the other end of the spectrum, the Culinary Experience is poking fun at the cocktail world's penchant for embracing "convoluted trendy culinary technique behind the bar." To take all of that one step further, you can expect classic cocktails with a snack food twist. Using techniques like immersion circulation, vacuum chambers or rotovap essential oils, the TLC team will mix up pizza daiquiris, ranch dressing gin sours, chips and salsa margaritas and whiskey and pho sodas in bottles.

Overall, even asking what the menu is conceptually yields a somewhat cheeky response:

"Spring obviously, but we try to match the greater Midwestern seventies basement feel. A dash of Italian influence, like a father who is half Italian, but insists on talking about the old country he's not from. I did notice when I was compiling our menu that we really only make tiki drinks anymore. Not tropical per se, but fun and really conceptual," Morris explains.

You can try out all 24 of the new drinks (hopefully not in one sitting) while the spring menu runs for the next few months. Morris says TLC's menu will change quarterly.

TUSD Searches for an Internal Auditor & Volunteers for an Audit Committee

What I Learned from Viva La Local Food Festival