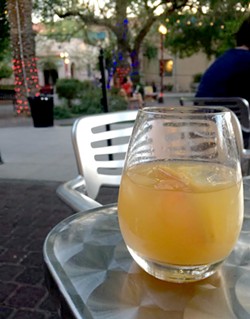 Heather Hoch
A Stigibeu punch at Pasco Kitchen.
Mezcal lovers crowded Pasco Kitchen & Lounge's dining room and patio last night for a special four-course dinner. Each dish in the prix-fixe meal was paired with a different Del Maguey mezcal, showcasing its region of origin and displaying the range of flavors in the agave distillate.

Starting off, Phoenix-area bartender Jason Asher served up a mezcal punch aptly named Stigibeu—the traditional toast for mezcal coming from the Zapotec expression of gratitude for a life connected to ancestry and the life forces around you. The cocktail was a fruity introduction to the sometimes intense spirit, mellowed out and balanced nicely as a stepping stone into straight up tasting.

The first course paired a beautifully simple caldo de piedra, or stone soup, with one of Del Maguey's most well-known (likely because its reasonable price point) mezcal varietals: Vida. The smoky, earthy notes from the spirit paired well with the very rustic soup, which had thinly sliced red snapper, shrimp, half a potato, fennel and coriander. The

Heather Hoch
Caldo de Piedra and Vida mezcal.
clean broth, which was poured over the other components tableside, successfully used its river stone boiled seafood base to provide a very subtle, but intentional palette by which to compare flavors.

Next up was a fideo with pulled roasted pork sholder and seared barbecue pork belly. The lightly sweet barbecue flavor on the vermicelli matched the citrusy notes of the mezcal Chichicapa. Although of all the dishes served this one suffered the most from temperature issues, the balance of sweet and spicy/smoky elements redeemed that issue. Plus, getting all of those portions out simultaneously is no easy task and most of the coursed dinners I've been to have also had that issue. 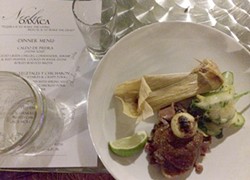 Heather Hoch
Roasted lamb and mole with Minero mezcal.
Course three was the dinner's main event. Roasted lamb was covered in a complexly spiced Oaxacan mole, rich in flavor and thick in texture. The dish came with a lamb tamal with incredibly smooth masa and a simple salad of thinly shaved squash and cucumber marinated in lime and cilantro to brighten up the more hearty elements of the plate.

This dish, paired with Del Maguey's Minero mezcal, which hails from Santa Catarina Minas, was my favorite combination of the night. Both the dish and Minero had a lot to think about. Distilled in clay pots, the Minero did have a distinct earthiness to it on the back end, complimenting the mole. The initial fruitiness of the mezcal contrasted the tart and herbaceous salad and the overall robustness of the plate's components went well with the roasted agave notes.

To finish, the dessert served up a bread-pudding like corn cake that tasted distinctly of its namesake. The accompanying spiced hot cocoa had a hint of orange flavor and a thick, but not completely smoothed texture. Served with the crema de mezcal—a blend of mezcal and agave syrup—the cake was equally sweet as the spirit. Made to to be an apertif or digestif, the crema de mezcal is a lot sweeter than your typical mezcal, which makes it more palatable for the beginning mezcal enthusiast. While it wasn't necessarily my favorite of the four spirit tastings because it took away from the mezcal itself, it did make sense in the context of a post-dinner drink.

Overall, the $30 four-course meal was an insane bargain, showing off both what chef Ramiro Scavo of Pasco can do in the kitchen and what the single village mezcaleros from whom Del Maguey source can do, which is to paint a broad spectrum of flavor with indigenous ingredients. The dinner was a brilliant look into the flavor of Oaxaca.