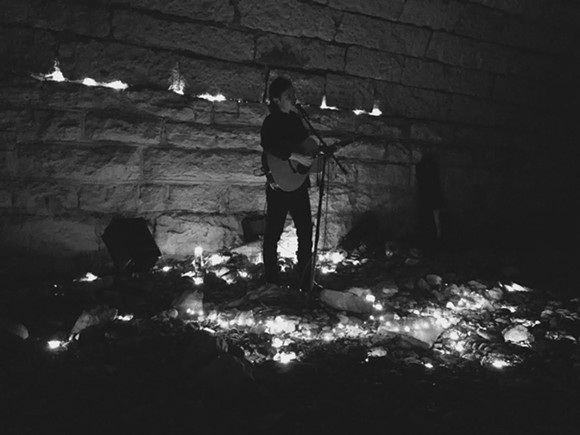 Cal Faber
Adam Torres plays under the bridge at a secret SXSW show.

By the time my car mate and I got to Fredericksburg, I was done being in the car. 15 hours of overnight driving—switching off listening to the "Bossypants" audiobook and then Rumours and then this Smash Mouth song she likes to listen to on the road only half-ironically—had taken its toll. Our eyes were red and puffy and we'd each gotten about two or three hours of sleep huddled up on the passenger seat.

Fredericksburg is my new least favorite place in Texas. While I enjoy its German kitsch, that last hour or so of driving on the stop light addled stretch of the 290 went on forever and I discovered all sorts of fun new swear words I didn't know I had in me, reserved especially for the drivers in that town. (Sorry, drivers of Fredericksburg)

So when we pulled up to the place we're staying for the week, shower was first on the agenda, though a nap would've been more wise. Lyfting our way into downtown proper, the streets were swarmed with people, which only got more congested as the trifecta of SXSW Music Day 1, St. Patrick's Day and UT Austin's spring break converged for one drunk, silly mess.

Wandering around, out first instinct led us to food, which meant a housemade duck and fennel sausage on a fresh pretzel bun and maybe a touch of rye and Mikkeller's imperial stout at Easy Tiger. After geekily approaching comedian Nick Thune and telling him he was funnier than Trevor Moore on @midnight the other week, we were ready for the fest.

Cal Faber
Phoenix's Man Hands kicked ass at Hotel Vegas.
First stop was Hotel Vegas, where even the unbadged (gasp) could enjoy some live music. Australia's nearly nude The Gooch Palms, Dallas' Sealion and Phoenix's Man Hands got to break our music seal for the festival. While I'd seen Man Hands a few times and knew Jackie Cruz could totally wail in a way that would make Cassandra Wong envious and maybe even a little frightened, I was pleasantly surprised with the caliber of the other acts, as well. I was also pleasantly surprised to notice that the first three bands had women in them—point one, SXSW.

After popping in for a cocktail at the impossibly cute Rio Rita's, we headed to the packed Stub Hub showcase, which was slotted to feature Charles Bradley, Future Islands and Portugal. The Man. However, despite having a badge and RSVPing, we were apparently also supposed to also get some red wristband at an undisclosed location or something.

"But you can wait in this line for people without wristbands and maybe get let in after all of the wristband people get in—but they do get to go first," the line arbiter said, gleefully. "It isn't hopeless."

"Not hopeless" isn't exactly my style and waiting in lines makes me grumpy (why did I come here?), so we marched over to the Fader Fort, whose preview night featured free Budweiser and Jack Daniels highballs as well as free cheeseburgers and potato chips. As me and my friend/"photographer" wondered who might be playing, Passion Pit took the stage with "Little Secrets," which nearly immediately took away out Stub Hub disappointment. But seriously, get your business straight, Stub Hub. 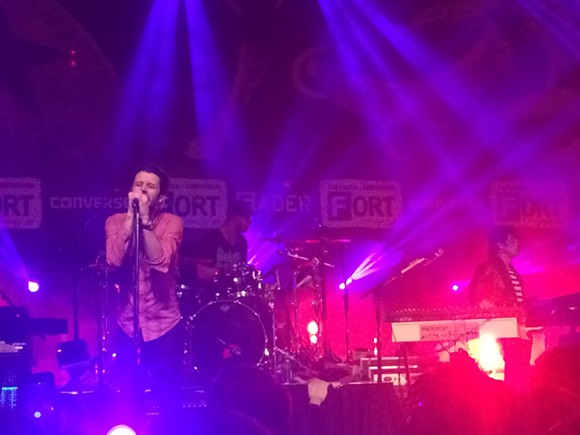 Passion Pit played a seven or so song set, which was talked over the entire time by entitled brats whose daddys got them SXSW badges because they got a C in a 100-level math class. The band looked visibly annoyed by the non-stop gabbing from the crowd and it was hard to dance or enjoy the show surrounded by a sea of mid-show selfies and drunken chatter. The fact that the band could seemingly hear that chatter over their own very loud and energetic electro indie pop was pretty depressing. If you can't watch the show in the crowd, kindly GTFO so the rest of us can. Thanks.

A tip from a friend led us to a secret show under a stone bridge near downtown. Candlelit, mellow and with a captive, respectful audience, the bridge show was the perfect opposite of Fader's event. Local artist Adam Torres killed it with an unrelenting and beautiful falsetto placed over delicate, plucked guitar.


Walking on the closed off Sixth Street had become a booze-fueled nightmare at this point, so it was finally time for sleep—which lasted about ten hours and was amazing.

Stay tuned tomorrow for TW Goes SXSW: Day 2. We promise our pictures will be better next time.

So This Is Why Conservatives Hate Federal Education Spending