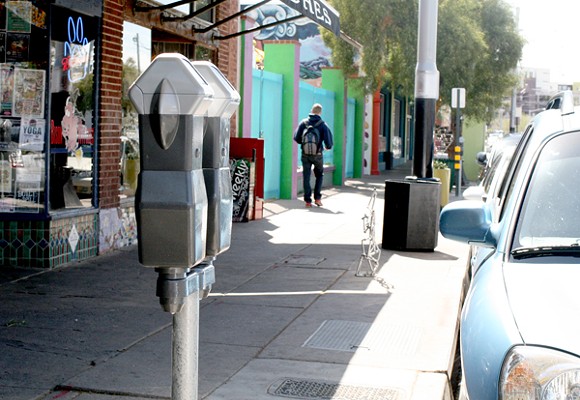 Heather Hoch
The free parking on Fourth Avenue is disappearing.
As of this afternoon, commuters and shoppers could park for free on the west side of Fourth Avenue, but certain patches of the east side of the street have brand new parking meters that are fully functional and taking coins, cards and app-based payments.

Just like downtown, these meters are set at $1 per hour of parking. Donovan Durband of Park Tucson says the money made from these meters will go to back to funding parking infrastructure in the city, which may eventually include the construction of a parking garage off of Fourth Avenue. He says that he can see a garage setup similar to the Centro Garage that also offers retail and residential space.


"There's always a fear of the unknown. Resistance to change is natural," he says. "I've been working with them for over two years on this, so it's not like they didn't know it was coming."

He says that he expects that the meters will actually help local business, despite that resistance from many of the Fourth Avenue merchants.

"Customers and diners will be able to find parking easier," Durband says. "It's going to discourage people from basically just occupying those parking spaces all day like students and employees. We're offering permitted parking for those employees now."

One such employee is Mirely Baca of the Rustic Candle Co. While there is a small shared lot behind her work, competition for those spaces is hot with Bison Witches and several other storefronts sharing the lot. She says the permit parking simply isn't an option for her or her employer because it's far too expensive at $20 per month per person—not to mention the fact that the spaces available are almost exclusively a few streets away from Fourth.

"I just don't feel comfortable being a woman walking alone at night after work. I can't imagine how some of the women who work at bars are going to do it," Baca says.

Baca sees the meters as part of an overall trend of setting back small local businesses, which to her also includes the street car construction and the looming two years of additional construction once the Downtown Links project is underway.

"We're trying to be unified but they're making it harder and harder to be a local business and a lot of people are upset. The City of Tucson is doing things that just don't benefit the citizens," she says. "Maybe if that money went to fixing some potholes I could deal with it."

Seeing as how the parking meters aren't going anywhere, if you frequent Fourth, you may want to download the Go Tucson app for easy parking payments. After all, Durband says it's kind of just the way it is.

"It comes with the territory of being downtown," he says.

What Best of Tucson Categories Do We Need?

Will We See Even More Outrageous Cuts to Higher Education in This Ducey-GOP Budget Deal?