The Best Bar in Tucson, According to Bartenders, Is… 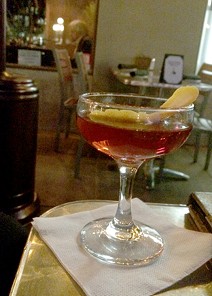 Heather Hoch
Last night Tucson’s chapter of the United States Bartenders’ Guild awarded bars and bartenders based on an industry vote. Categories like best dive bartender, best volume bartender, and best rookie bartender recognized those behind the stick for their specialties.

The big awards—best bar and best bartender—actually went to the same establishment this year. Hotel Congress was chosen by the food and beverage industry voters as the best bar with Congress’ Keith Caywood voted to be the best overall bartender. Congress’ David Clark was also recognized as the best craft bartender that evening.

We’d have to agree somewhat over here at the Tucson Weekly, seeing as Barb Trujillo of Congress won as our best bartender for the 2014 Best of Tucson awards. The bar and club also won best club for live music, best nightclub, best place to dance, and best signature cocktail (the Ghost Orchid).