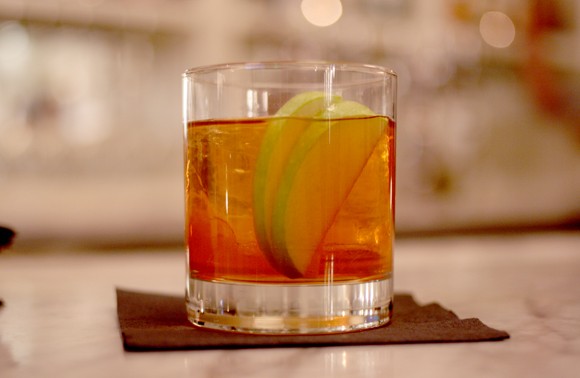 Heather Hoch
Sure this drink is a little sweet and fruity, but that doesn't mean it's weak.

If you’re looking for a liquor-forward drink for late fall nights, Agustin Kitchen’s Gaelic Gravity is a clever blend of scotch, apples, cinnamon, and smoky flavors that is both drinkable and well-balanced, while still maintaining its edge.

Bartender Ciaran Wiese starts the process of making his Gaelic Gravity cocktail about a month in advance. Wiese infuses Teacher’s blended scotch with Granny Smith apples and lets the flavors blend until the whiskey is sufficiently, well, appley. At the same time, the cocktail’s tobacco tincture is made in house by infusing pipe tobacco and Everclear.

From there, the two infusions are mixed with cinnamon simple syrup, Angostura bitters, and Connemara, a peated Irish whisky. Rather than masking the spirit with cinnamon, the cocktail builds on the spirit’s flavors first, resulting in a well-rounded cider-like drink with a nice mix of sweet and smoky flavors.

While I can only wonder what it might be like if the apples were infused into and Islay scotch to begin with, the subtle earthy, peatiness of the Connemara is a nice introduction for non-Islay drinkers who aren’t ready to go full Laphroaig Project— a (kind of intense) cocktail which blends Islay scotch, bitters, and Chartruese.

You can try the smooth Gaelic Gravity for $11 at Agustin Kitchen, located at 100 South Avenida del Convento in the Mercado San Agustín.

Gilbert Conservatives Gird Their Loins [With Chastity Belts] For Battle