What You Need to Know Before You Go to That Poutine Place, U.S. Fries 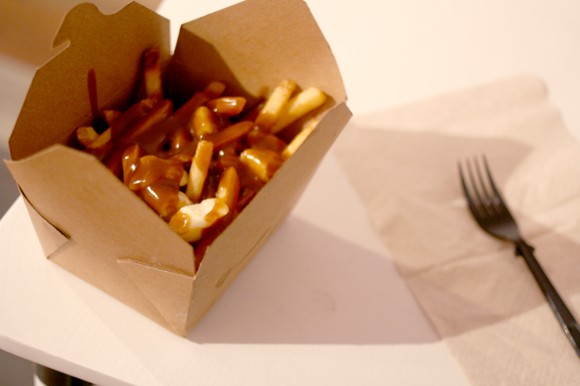 The prospect of a restaurant that serves only poutine dredges up some complicated emotions. There’s the side of you that wants to eat French fries, gravy, and cheese curds all night and forget about all of the locally-grown, artisanal stuff for a little bit—it’s hard to be responsible all of the time. Then there’s the side of you that kind of wants to punch a wall at the gimmickiness of it. Unfortunately, you probably won’t feel too resolved on either front after a visit to Fourth Avenue’s newish restaurant: U.S. Fries.

In terms of set up, there are a few issues out of the gate with this fast casual restaurant, located just south of Seventh Street. First off, there’s only table seating for ten people so once there are ten people eating poutine, you have to grab one of the tableless high chairs that line the storefront window and eat off of your lap. Not exactly dignified, but hey—you’re eating a box o’ poutine.

This wouldn’t be so frustrating if there wasn’t so much empty, unused space in the restaurant. U.S. Fries could likely double the seating capacity with some creative rearranging or if they just bought high top tables for those chairs or they can be happy feeding only ten people at a time, though that model doesn’t seem particularly viable for a fast casual spot.

Seating issues aside, the restaurant is decorated like a fast food joint, but insists in pricing that it is fast casual with $5 to $7.50 for a regular size and $8 to $11.50 for a large. The bright, abrasive primary colors say "leave" nearly as much as the lack of seating. Additionally, the futuristic soda, plasticware, and napkin dispensers make the place feel sterile. 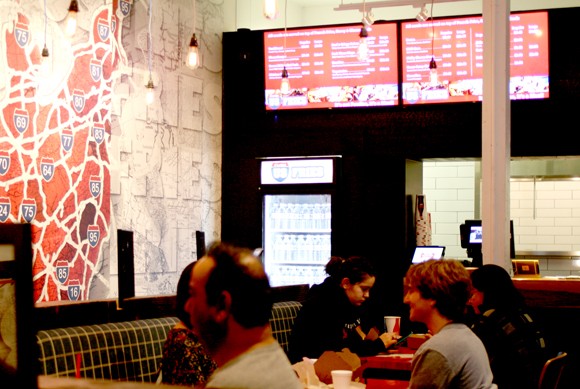 Heather Hoch
While the food itself isn't bad, the restaurant is kind of unpleasant to be in.

Despite the restaurant’s lack of any semblance of ambiance, the service was actually very friendly and quick. Choosing between gussied up options like, chili topped with chives and cheese, cheeseburger topped with pickles, and a questionable combination of ham, pineapple, gravy, and cheese curds, all atop a bed of fries, might be a little rough on your first go so start with the traditional.

Admittedly, a $5 regular-sized poutine was more than enough food to fill up, holding true to the restaurant’s obnoxious motto that “it’s not poutine, it’s a meal.” However, the brown gravy was too salty and the cheese curds were too large and remained off-puttingly cold in the center. If you’re touting a food with just three elements, those elements should be dead on. Plus, would it kill them to put some chives or something on top so I can maintain some illusion of healthiness? A little green never hurt anyone.

All that being said, it’s still just fries with gravy and cheese and that tastes pretty good no matter who you are (they even have a vegetarian option). It’s not like this is the sort of place that should be a regular stop in your dining roster, but maybe if you’ve had too many drinks at Che’s on the weekend, it’s worth it to walk down and try it out. After all, they are open until 3 a.m. Thursday through Sunday and 10 p.m. the rest of the week.

Team Barber Gets Its Day in Court: Will Disqualified Ballots Get Back Into the Mix?

Dance for Thanks Benefit Aims to Keep the Folk Fest Free