Tanias 33 Offers 12 Soups to Warm You Up 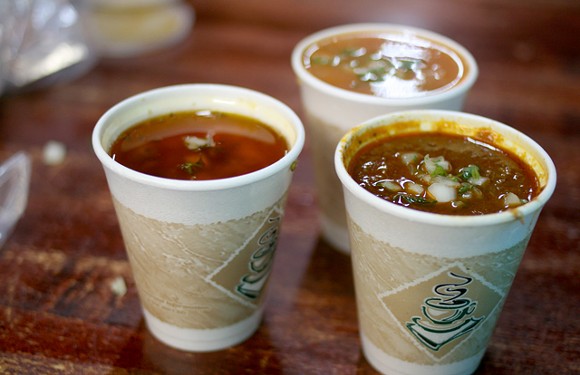 Heather Hoch
Maybe the best $2 you can spend in Tucson.

Not to get all Doris Day on you, but it’s cold outside, which means it’s time to get soup and a lot of it. At this point, if you don’t know of Tanias 33 in Barrio Hollywood (614 N. Grande Ave; Monday - Saturday, 7 a.m. to 6 p.m., Sunday, 7 a.m. to 3 p.m.), it’s definitely the opportune moment to stop into the little Mexican joint and grab a bowl or three. Whether you’re vegan or not, Tanias 33 has soup to satisfy and keep you warm when Tucson gets sort of coldish.

There’s a sign out front of Tanias advertising the fact that they carry 12 soups daily. 12 soups daily is music to my soup loving ears. The list of caldos includes Mexican classics likes albondigas (meatball soup), menudo, menudo colorado and more. 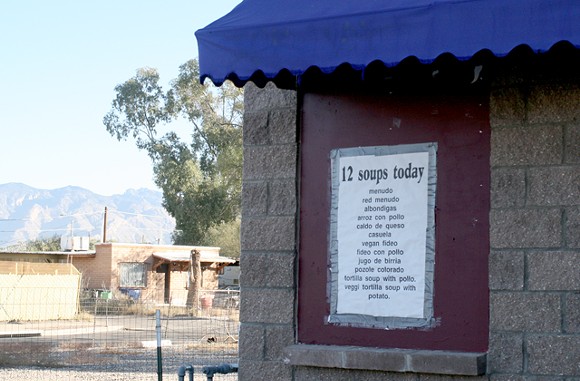 For the more adventurous, you can get the jugo de birria de res. Once you order, you’ll be met with a bowl of stew-like slow cooked beef packed with chiles and spices with a densely rich flavor. After all, slow cooking any cut of meat, no matter how garbage-like, will likely yield tasty results. While the finished product was a bit too salty, the heartiness of the meat-packed caldos was instantly comforting.

On the other end of the spectrum, the cazuela might look more like the soups you’re used to, but the mixture of roasted green peppers and onions gives this soup depth. The carne seca perks up in the beef broth, though it is admittedly a bit greasier than you’d expect. 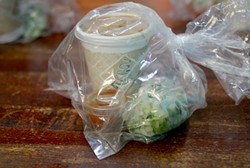 Oddly enough, of all of the soups at Tanias, the vegan fideo had the most balanced flavor. Without the carne crutch, the delicate blend of citrus, salt, tomato, and spices in the broth all meld together perfectly. The rice vermicelli cooks in the broth, giving the finished product a delightfully velvety texture and using the starch in the noodles effectively. There’s a reason people say they’ve seen famous meat-free folks like Jared Leto at Tanias, after all.

Best of all, when ordered to go, you get your cup of soup wrapped up like one of those fish you win at the fair. However, instead of having a dead fish when you get home, you get a modest portion of soup paired with fresh cilantro, onion, and cucumber and a small side of salsa for only $2 for eight ounces. Until you pick your favorite of the 12 Tanias 33 soups, getting several of the small cups is the way to go, though two or three will definitely be filling.