It was all going so well in Godzilla…until the damn monsters showed up.

We knew Hollywood would get here eventually, because they rehash so many things, and this one is the granddaddy of ‘em all. Although not the first metro-mauling monster movie, the original Godzilla from 1954 really set the stage for the widespread destruction we see today. Since that time, the Beast from the Far East has been distorted from the original intent countless times, which is a real shame.

In the beginning, Godzilla was a metaphor for nuclear proliferation, which had a particularly sobering effect on Japan some nine years after World War II. Over the years, though, he’s become just a by-product of nukes, and the shock that originally accompanied him has long since disappeared. By the time an American remake was dropped on unsuspecting, innocent audiences in 1998, it was just laughable.

So give this new version credit for going back to the basics, at least for a while. A nuclear scientist (Bryan Cranston) is trying to get to the bottom of a disaster he witnessed in Japan 15 years earlier. It killed his wife and has nearly driven him to the point of madness in the years since. But he knows it wasn’t a nuclear accident at the power plant; there has to be another explanation. His son, Ford (Aaron Taylor-Johnson), has to travel from San Francisco back to Japan to bail his father out of jail after crossing into a zone quarantined for nuclear fallout.

Fast-forward quite a bit and we get to the bottom of it: there are ancient creatures who used to feed off radiation when the Earth was a lot less stable. Now they live at the bottom of the oceans sucking juice from the planet’s core. Scientifically, that’s not terribly sound, but for an introduction to giant monsters, OK. And there’s real drama here, too, particularly a scene where Cranston demands some answers, damn it! He’s consistently great here and for a while you actually think they’ve made a terrific summer blockbuster.

The frontloaded storytelling would explain a lot of the talent wandering around: Ken Watanabe (The Last Samurai) as a scientist, Elizabeth Olsen as Ford’s rather disposable wife, Juliette Binoche for some reason, and the always solid David Strathairn (Good Night, and Good Luck). They must have been told monsters would never be seen in this movie, like Cloverfield, and now they’ll never trust their agents again.

On the other hand, director Gareth Edwards ought to keep his agent in floral bouquets for years. He had only made one feature before this, an indie monster movie called, simply, Monsters. He’s got chops, and there’s definitely enough signs of life in Godzilla to keep him working for a while.

As an effects show, this offers us nothing new. There’s a fourth Transformers movie this summer; replace sea monsters with robots and the carnage will be effectively the same. But the real problem for the film comes with how everyone else deals with the awesome power of such a towering creature. The movie and everyone in it totally loses their marbles, and at one point, poor Ford aims a revolver at a radiation-sucking monolith that’s over 300 feet tall.

On its own, of course, that strain of stupidity would be totally fine. The world can tolerate a few stupid movies every summer. But Godzilla knows it’s smarter, shows it’s smarter, and then just gives up.

Word Odyssey: Giving the “Devil” His Due

Godzilla, Godzilla 3D and Godzilla: An IMAX 3D Experience are not showing in any theaters in the area. 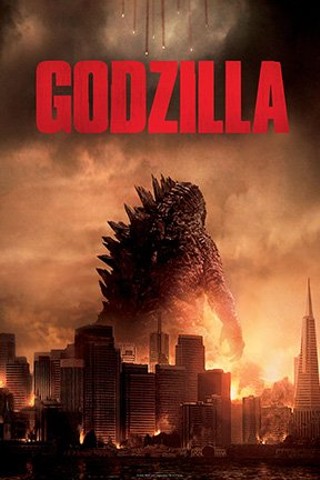