I’m back from SXSW, in the comfort of my home, with my feet up on the footstool and a hot cup o’ joe in my hand. Here’s a run-down on some of the bands I caught over the last couple of days.

Over at the Thrasher Death Match party at the Scoot Inn, I caught a blistering set from Savannah, Georgia’s Black Tusk on the outside stage. A three-piece metal band, Black Tusk got the crowd revved up with their roaring songs about embracing madness and unleashing wrath. Another band from Savannah, Kylesa, toned down the attack but still delivered a thunderous set. I’m a sucker for bands with two drummers (unless you’re The Grateful Dead, in which case I’m outta here) and while Kylesa doesn’t utilize them as brilliantly as say, the latest incarnation of The Melvins, the extra drummer definitely gave the band a dense bottom-floor to trudge on. There was a different scene going on inside the venue. L.A.’s Youth Code may not be a traditional hardcore band, but their short set was full of crackling energy. A boyfriend/girlfriend duo, Youth Code are two ex-hardcore twenty-somethings flirting with industrial dance music. Think Agnostic Front by way of Skinny Puppy. I had never heard of this band before, and without a doubt they were the best surprise of the festival.

I caught punk supergroup OFF! twice this trip. Comprised of members of The Circle Jerks, The Burning Brides, Redd Kross and Rocket from the Crypt, OFF! play one to two minute short blasts of pure manic energy. These were the only shows I caught where stage diving was rampant, and mostly done by guys way over the age of 30. At one of their gigs, a guy in a Verbal Abuse shirt tapped my shoulder and shouted “Woody Harrelson!” in my ear while motioning towards my right. Sure enough, The Woodman was in the house, wearing aviator shades and tapping his foot. Good for you, Woody.

Playing at one of the OFF! gigs was Syracuse, New York’s current media darlings, Perfect Pussy (have fun with that Google search). Taking the stage at 5 p.m. sharp, lead singer Meredith Graves announced “this is our 15 minutes of fame” and proceeded to weed out the crowd with a near 12 minute noise jam, courtesy of the young man on samplers, loops and other ungodly noisemakers. After that, all bets were off when the band snapped to it and played an unforgiving 30 minute set of brash hardcore tunes. Graves’ vocals were nonexistent; I thought her vocals were lost in the mix, but a fan told me afterwards she always forgets to turn the mic on. Go figure. Here’s a little insight: Graves has two miniature tattoos on the back of her neck - the ubiquitous Black Flag bars, and above that, the muted trumpet from Thomas Pynchon’s The Crying of Lot 49. Take from that what you will.

Thanks Austin. Until next time. 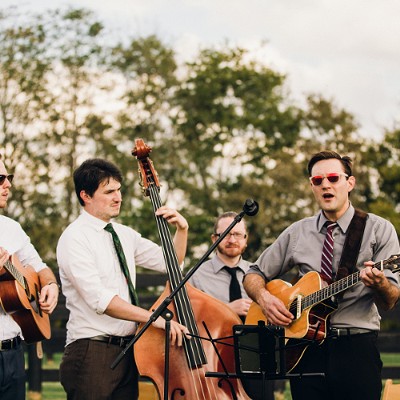