Jaw-Dropping Education Op-Ed In The Star

"Who is this person?" I asked myself as I read Vicki Alger's op ed, Education improves when parents can bypass clueless bureaucrats, in today's Star. It segues from a diatribe against the U.S. Department of Education to a fact-challenged advocacy of vouchers into one of those states rights, 10th Amendment statements so popular on the far right. Who is this uninformed, unhinged character?

It's worse than I thought. Vicki Alger is actually a "very serious person" in the world of ed privatization: research fellow at the Independent Institute (a libertarian organization with lots of money and questionable integrity), former director of the Goldwater Institute's Center for Educational Opportunity and on and on. Oh, and she sits on the board of BASIS charter schools in Chandler and Phoenix. Alger is widely published and according to her blurb, working on a book about the U.S. Dept. of Ed. Meaning she's a cog in the vast, well funded "education reform"/privatization/corporatization machine, where facts are optional and research begins with the conclusion and works back to the data.

Let's take a walk through some of Alger's statements in the op ed.

"Results on the Nation’s Report Card for 9-, 13- and 17-year-olds in reading, math and science have virtually flat-lined since the early 1970s."

I guess it depends on how you define "virtually flat-lined." Looking at the NAEP scores from 1973 — NAEP is the closest thing we have to a gold standard in testing, accepted as valid by people on the right and the left — reading scores for 9 year olds went up 13 points, 8 points for 13 year olds. In math, 9 year olds' scores went up 25 points and 13 year olds' scores went up 19 points. During that time, the gap between between white, black and Hispanic students has shrunk. It's not as much progress as anyone wants, but it's hardly flat-lining.

"This year, 245,000 students attend schools their parents have chosen through 32 voucher and tax-credit scholarship programs in 16 states and the District of Columbia, as well as one educational savings account program in Arizona. Research consistently shows participating students have higher graduation and college attendance rates, and higher reading and math scores, than their peers."

Research doesn't show voucher students outperform similar students in public schools. A study of the decades-old Milwaukee voucher system by a group of conservative scholars found insignificant differences in achievement between the two groups of students. The researchers tried again. When they sifted through the data a second time, they found a difference in graduation rates, popped champagne corks and congratulated themselves. "Finally, we found something that supports our agenda!" In a study of D.C. vouchers, conservative researchers were so desperate, they latched onto the only positive stat they could find: voucher parents were more satisfied with their children's private schools than similar parents at public schools. The students themselves? No difference in satisfaction levels.

"200 scientific analyses"? I can only guess she means 200 schools were compared in a few studies. I've seen some of the research I think Alger is referring to. It shows what may be a slight trend toward minor improvements in some public schools in areas where vouchers have placed students in private schools. It's weak tea at best, only important if you have an agenda to promote.

Vicki Alger once sold fool's gold at the Goldwater Institute. Now she's peddling her snake oil at the Independent Institute. Today, she pulled her wagon loaded with bottles of her magic "school choice" elixir to the Star and pitched her wares in its op ed pages.

Have Questions About SB 1062? Today's Your Lucky Day

The Infamous Olympic Rings of Sochi 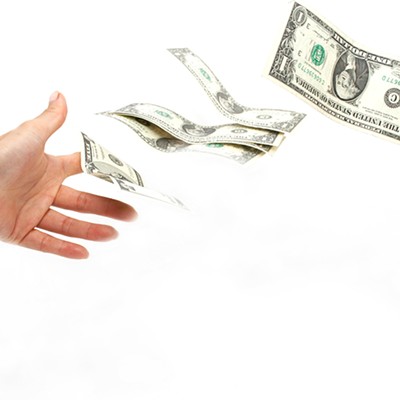