Letter From Vail Superintendent Regarding Guard Arrest and Teacher Misconduct

Today 71-year-old Cienega security guard Eric Oswald was arrested for contributing to delinquency of a minor. Oswald reportedly started a relationship with the 15 year-old Cienega student when she was 14 years old. It has been reported that Oswald and the student only kissed four or five times. A female teacher at Andrada was also placed on administrative leave for allegedly having inappropriate contact with a student.

Our mission statement makes it clear: "It is the mission of the Vail School District to provide parents with safe and nurturing school
communities..."

Those of us in leadership positions within the District personalize that standard. It is easy to do as most
everyone of us have entrusted our children to the District's schools. When making personnel decisions we ask: "Is this person someone I would trust with my son or daughter?"
As such, it is personally troubling and disheartening when allegations are made that a staff member has violated our most basic mission.

A male security guard at Cienega High School is facing a misdemeanor charge of contributing to the
delinquency of a minor. Specifically, he is charged with kissing a 15-year-old student. When the District
became aware of the allegations, the employee was placed on administrative leave. He has since resigned.

There are also allegations that a female teacher at Andrada had inappropriate contact with a student. The
teacher has been placed on administrative leave while the allegations are being investigated by law
enforcement.

No one has admitted guilt or been found guilty. I ask and hope that your judgment is withheld until investigations and/or trials are final.

We will cooperate fully with law enforcement as both of these situations continue to unfold.

One of the saddest aspects of these allegations is the shadow they cast on the hundreds of employees in Vail who care so very deeply about your children...employees do everything they can to make our schools safe and nurturing for your child. They uphold the highest moral standards and would not hesitate to put themselves in harm's way to protect your child. I ask you to continue to honor and trust those employees.

If the allegations prove true, please accept my deepest apology.

PCC Board Wants You To Help Oversee Finances 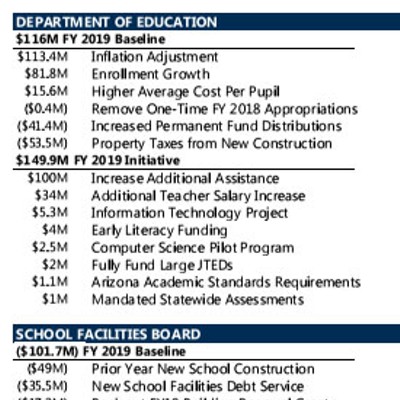