All dogs go to heaven.

His family announced his death last week, Oct. 18, via Facebook:

It is with a heavy heart that we announce Giant George died last night. George passed away peacefully surrounded by loved ones; one month before his eighth birthday.

We appreciate the love and support you have given Giant George over the last several years. We look forward to honoring his spirit by continuing his charitable works.

Your thoughts and prayers are much appreciated.


But worry not, Weekly Rangers: George isn't taking this 'death' thing laying down. No, he's continuing to write to us insignificant humans from the Great Beyond,  riding that Rainbow Bridge in the sky (which we assume is the bridge between Earth and Dog Valhalla)...and now he has wings?

Greetings from the Rainbow Bridge...

'Tis Grand here...I did a lot of frolicking today...Whilst frolicking I was thinking of giving back in a Giant way.

Here's what I am thinking:

November 17 marks my 8th birthday, and although I cannot be there in body, I can be there in spirit. I would like to make November 17 Giant George Service Day...a day for GG Nation to honor my spirit by giving of their time and/or shekels to an animal cause that is important to each of you.

Your time and/or your money will make a big difference in an animals life...

Help me make November 17 Giant George Service Day by sharing with your fellow humanoids and making something Giant happen!


Ignoring how bizarre it is that such a huge dog/small moose has an Internet connection in whatever Dog Heaven (and uses it to hang out on Facebook, apparently), at least he's still attempting to do good things up there.

If you're interested in taking part in Giant George's Day of Service, you can hook up with the Facebook event here. And in keeping with George's desire to help out animals (and let's listen to what he says: there's nothing scarier than the idea of a huge, winged dog swooping down to exact vengeance), why not adopt a critter from the Humane Society of Southern Arizona, where adoption fees for all dogs, cats, puppies and kittens are $50 (and free for all dogs and cats more than six years old) 'til the end of the year. 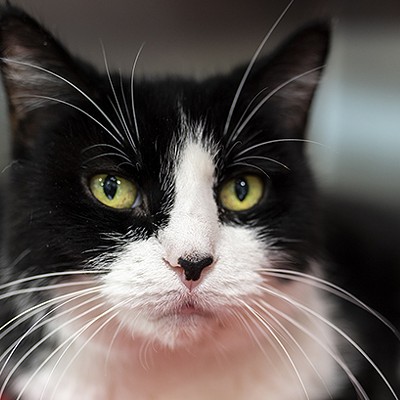