Just in case you missed it over the weekend: The apocalypse officially began when John Abarr of the United Klans of America (KKK) met with Jimmy Simmons of the NAACP. The meeting, believed to be the first of its kind, was coordinated by Simmons to address reports of attacks against black men and KKK pamphleting in Gillette, Wyoming.

From the Associated Press:

Abarr told The Associated Press that he met with Simmons Saturday and ended up filling out an NAACP membership form so he can get the group's newsletters and some insight into its views. He said he paid the $30 fee to join, plus a $20 donation.

But Abarr said he didn't ask anybody at the meeting if they would like to join the KKK.

"You have to be white to join the Klan," he said.

Simmons asked for the meeting following reports that KKK literature was being distributed in Gillette, about 130 miles north of Casper, and that African-American men were being beaten while out in public with white women.

"It's about opening dialogue with a group that claims they're trying to reform themselves from violence," Simmons said in a telephone interview Tuesday, saying the meeting went well. "They're trying to shed that violent skin, but it seems like they're just changing the packaging."

Abarr said he knows nothing about any beatings or the literature that was distributed in a residential neighborhood in October.

Magic and Miracles, Juggalo-style (Just Because)

Claytoon of the Day: A Manly Cartoon 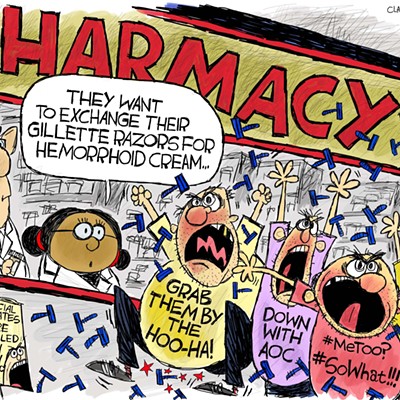 'Lynching in America': An Excellent, and Horrifying, Educational Resource