Child Being Born to Heirs of Monarchy Our Forefathers Valiantly Fought Against, and Too Many People Care

So, the child of Prince William and Catherine, the Duke and Duchess of Cambridge, has apparently sprung from the nethers of the former Kate Middleton, and is now on his/her way to being the Most Important Baby In the World since Blue Ivy Carter and North by-North West, who most recently claimed the title that has belonged, in the past, to such luminous names as the Olsen twins, Suri Cruise and Justin Bieber, retroactively.

This birth, understandably is one of the biggest occurrences to have ever happened, ever, because at some point our society became similar to that depicted in Children of Men, and births are rare as f—k.

While some media outlets are taking this opportunity to whore for as many page views as possible (looking at you, places that are promising the baby picture and delivering an image of a waddlingly-pregnant Kate), one of the few bright sides to the whole ordeal has been the stories of bets taken by British bookies on the baby's name:

Betting agency Coral described it as the biggest non-sporting betting event in the company's history, with gamblers racing to wager on everything about the new heir to the throne.

"The whole world has been waiting for Kate to go into labor and now that she has, we have witnessed another betting frenzy," said Nicola McGeady, spokeswoman for the firm.

"Punters (bettors) have been anxiously clutching onto their betting slips for months now and if the money talks, the baby will be called Alexandra, with brown hair, weighing 7 pounds to 7 pounds, 15 ounces, an outcome which will prove a nightmare result for the bookies" — because of the amount of money they will have to pay out.

But my favorite part has to be the habit of (ironically or unironically) suggesting ridiculous baby names via the #RoyalBabyName trend on Twitter:

The name Skylynn would be perfect for a lil princess! #RoyalBabyNames


Rodriguez Charles Bronson Windsor kind of rolls off the tongue, plus he could shoot swans with a Magnum #RoyalBabyNames


Catherine Diane if it's a girl. Boy's name is attached. #royalbabynames pic.twitter.com/N64QAP9Hna


I'm not sure which one is the winner here: Prince 'Love Symbol', or Prince ROAWPPLF (for short, obvs).

Either way, this is the last time we'll be writing about this unless something actually important regarding this child happens.

Here's to a healthy and happy child, Future Heads of a Country We Fought to Sever Ties From!

Claytoon of the Day: Royal Babies 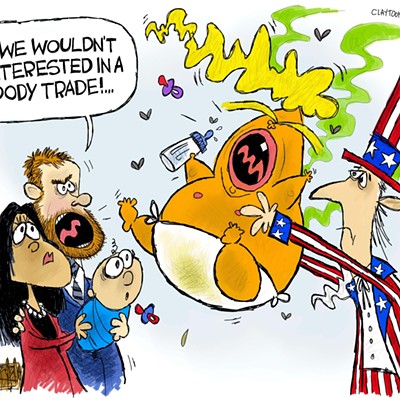 Brace Yourselves: There Are Now Amy's Baking Company T-Shirts

For Four UA Grads, Tying Shoes Is A Sucker's Game