Your 3D Printed Gun Might Blow Up In Your Hands

Remember the Liberator? The single-shot plastic gun, made with fairly cheap materials, fabricated with 3D printers? The one whose blueprints were pulled down by the State Department, but not before they were downloaded more than 100,000 times and distributed countless more times?

Well, if you happen to be printing off such a weapon, be careful — Australian police tried it, and one of the damn things blew up on 'em.

The commissioner said that a Liberator pistol had experienced a catastrophic misfire during testing. The failure would have been capable of seriously injuring the person using the firearm, the police chief said.

When the pistol successfully fired, it propelled a bullet with sufficient force to kill a target, the police revealed. When tested using a block of so-called ballistic soap — a block of gelatine used for firearms testing — the shot penetrated 17cm, which could be a fatal wound, the police said.

The police spent $35 on materials to create a Liberator and used a $1700 desktop 3D printer. The only metal parts used in the pistol's construction where the firing pin, created with a nail, and a .380 ACP calibre pistol cartridge. The all-plastic body means that the pistol is hard for security forces to detect.

Inspector Wayne Hoffman said the creation of a pistol took the police around 27 hours. Assembling the pistol's 17 parts took around a minute. Hoffman said that the police had exactly followed the original instructions for creating the Liberator, with a number of modified versions of the file currently in circulation.

Granted, there's no word on how many shots were fired with that pistol before it blew, so that might have been the result of stress and warping. Either way, that thing appears to have blown up, and blown up good.

No one's saying you shouldn't make one of your own (aside from, y'know, government agencies, possibly), but be careful, folks.

Let's All Celebrate the 80th Birthday of a Tucson Institution: Tiger, of Hotel Congress's Tap Room! 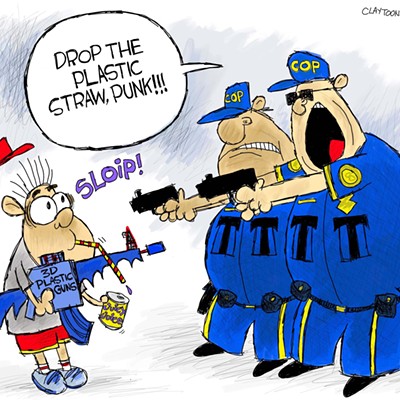