Citing the proverbial desire to spend more time with his family, controversial Arizona Game and Fish Commissioner Jack Husted resigned his post yesterday. Most recently serving as chair of the commission, Husted had come under fire for his illegal poaching of a prairie dog out of season last year, and for his trenchant stances against the federal Endangered Species Act.

Here’s what Husted had to say in his resignation letter:

Having served in a volunteer capacity on several appointed boards and commissions in Arizona, I have enjoyed my public service opportunities and in particular my service on the Arizona Game and Fish Commission. I have worked hard over the past four years as a commissioner to strengthen the department’s role and responsibilities in managing and conserving our state’s wildlife, which is held in trust for our citizens. It has been humbling to stand alongside other commissioners and departmental staff to strengthen the governing pillars of wildlife management and conservation in our nation — the North American Model for Wildlife Conservation.

However, I have come to the realization that it is time to embark on a new chapter in my life, as a private citizen, with time to focus on my family, my faith and my professional endeavors. So with this letter, I tender my resignation as a commissioner on the Arizona Game and Fish Commission effective immediately. I am grateful and honored to have had the opportunity to serve your administration as a commissioner and sincerely thank you for the confidence you showed in appointing me.

The PDF version can be found herehere.

Claytoon of the Day: Mattis Salutes 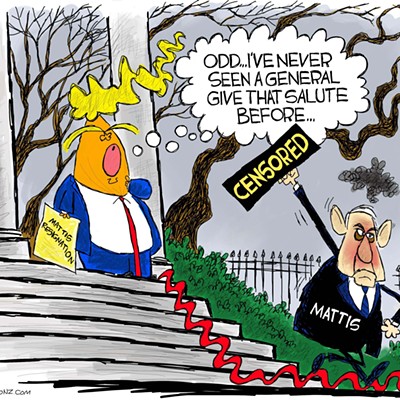