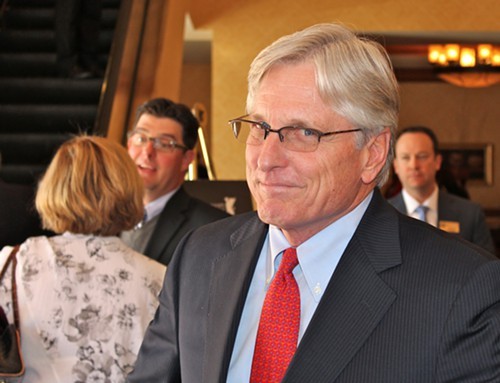 The announcement is a boost for Democrat Fred DuVal, who announced his exploratory campaign for governor last month. At this point (and it's ridiculously early for 2014 speculation), the only other serious Democrat publicly considering a run is state Rep. Chad Campbell, but he can't announce his plans without triggering Arizona's resign-to-run law. (We have a full run-down on the Dems and Republicans jockeying for the race here.)

DuVal, who has worked in the Clinton White House and as an aide in Bruce Babbitt's gubernatorial administration, has been announcing a lot of endorsements lately. Today he got the thumbs-up from three former members of Congress: Harry Mitchell, Karan English and Sam Coppersmith. Last week, it was more than six dozen Democratic officials and former lawmakers around the state, including Pima County Sheriff Clarence Dupnik and Pima County Attorney Barbara LaWall. The week before that, it was nine current Democratic lawmakers. You can expect more of this in the future as Duval works to sew up support and avoid a contentious and expensive primary race next year.

The Fascinating Profile of One of Arizona's Greatest Athletes, Anthony Robles