Wildcat Hoops Fans: Contrary To Popular Opinion, The Sky Is NOT Falling 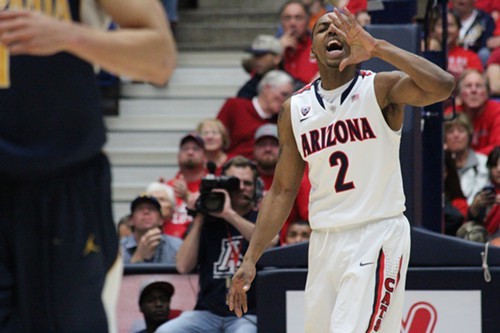 I don't consider myself the No. 1 authority on University of Arizona basketball — after all, I've never written a coffee table book on their most successful coach or anything like that — but I think after following the team for 19 seasons I've got a pretty good idea about the program's making.

And no, this is not one of the worst Wildcat teams of the past 25 years, as one very well-respected former colleague of mine purported this morning.

Arizona is ranked 18th in the country, and at 23-6 has a better record than all but about 25 of the 347 teams that play Division I basketball. Yes, the Wildcats have struggled this past month thanks to a frustrating blend of weak defense, inconsistent offense and an unset rotation of players that never seem to find a way to work well with each other.

But does that make them one of the worst UA teams (sans the transition teams of the late Lute Olson era) in recent memory? Probably not.

We really can't do such a comparison until the season is over, and frankly, everything hinges on the NCAA tournament, as it does every year. The 2010-2011 UA team wasn't considered anything special ... then it went on a killer run in March and nearly made the Final Four.

On the opposite spectrum, it's more common for Arizona to put on the court a team so highly rated that the expectations become far too supreme. Remember, this is a program that has produced so many woeful first round NCAA tournament exits that when it was matched up with East Tennessee State in the Diamond Head Classic in Hawaii over Christmas I saw numerous Facebook and Twitter posts talking about how "we're gonna get revenge for '92!!!!!"

Yes, 14th-seeded ETSU beat No. 3 Arizona that year in the NCAA tournament. The next year, another good, second-seeded UA team lost in the first round to Santa Clara.

And the next year the Wildcats made the Final Four. These things happen.

For my money, the worst UA team that was expected to be good was the 2003-2004 club, which had uber-talents Andre Igoudala, Hassan Adams, Salim Stoudamire and Channing Frye (not to mention a highly-touted but unreliable point guard, Mustafa Shakur) and still managed to turn a 13-3 start into a 20-10 season that ended with a No. 8 tourney seed and a pathetic loss to Seton Hall.

Any team that forces me to fly all the way to Raleigh, N.C., just to watch them lose in the last time slot of the final day of the first round of March Madness, that team gets my No. 1 crappy UA squad ranking.

(I'd say the UA's Sports Information people agree with me, if a glimpse at the Archives page on www.arizonawildcats.com is any indication)

I understand the desire to think the sky is falling because the UA was swept in Los Angeles last week. It's not a good feeling. But take solace in these facts: two years ago, the Wildcats also went 0-2 in late February in LA, then made the Elite Eight. And in 1997 the Wildcats lost its final two regular season games, at California and Stanford ... oh and then ran off six straight to win the title.

Don't take those cyanide pills yet, Wildcat fans. Wait until after the disappointing second round loss on March 23 to hit the bottle and go right to the rock.